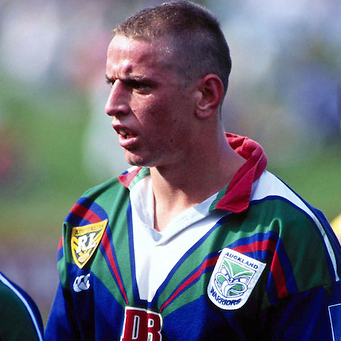 One I always liked was Doc Murray, I thought he was good for ISP or whatever it was called then and think he had a few 1st grade games. I thought he would make the step up to NRL but didnt seem to.
Reactions: matiunz and mt.wellington

Tragic said:
One I always liked was Doc Murray, I thought he was good for ISP or whatever it was called then and think he had a few 1st grade games. I thought he would make the step up to NRL but didnt seem to.
Click to expand...

He's from my home town. So before the Warriors stared you would often get people around town telling you what was going at the club like they were in the now or something. One of my mates is a cousin of his or his cousin was going out with him but I never saw him around town.

He played a game at fullback. A Friday night game at Brookvale.

Then went to Wigan with Monie or Endacott along with one of the young front rowers. Then came back to play local league, might have played Lion Red Cup or other national comps. One of my mates would tell me he was playing for <insert club>. Think he also ended up playing union in Rotorua for a while.
Reactions: matiunz

Tragic said:
One I always liked was Doc Murray, I thought he was good for ISP or whatever it was called then and think he had a few 1st grade games. I thought he would make the step up to NRL but didnt seem to.
Click to expand...

He was at the first home game this year. Still a very passionate fan of the Warriors...
Reactions: Tim burgess, matiunz and Akkerz

mt.wellington said:
He was at the first home game this year. Still a very passionate fan of the Warriors...
Click to expand...

He coached Otumoetai Eels from Tauranga in their early days and is a really good referee. Hes got the pink jersey back on this year.
Reactions: mt.wellington

A Ellerslie Eagles junior, Murray was picked up by the Warriors after playing for the Auckland City Vulcans.

After a horror run of injuries to the Warriors starting fullbacks, Gene Ngamu and Marc Ellis, Doc was selected to make his debut in 1996 against Manly in a game they lost 10-22. He spent the rest of the year playing on the Warriors Reserve Grade team.

In 1997 he moved to England, signing a two-year contract with the prestigious Wigan Warriors. However he did not find a place in the first grade side and late in the season he was loaned to the Warrington Wolves. Murray then spent 1998 loaned to the Lancashire Lynx club in the second division. During this time, he also had some trials with rugby union club, the London Wasps.

He returned to Australian competition in 1999, playing one National Rugby League game for the South Sydney Rabbitohs off the bench.

He returned to New Zealand in 2000, playing one season with the Ngongotaha Chiefs in the Bartercard Cup. During the season he was again selected to represent New Zealand Māori.

Between 2006 and 2008 Murray coached the Otumoetai Eels in the Bay of Plenty Rugby League competition.

31 Mark Carter - ??? retired from Auckland NPC Rugby Union in 2000 Still have absolutely nothing on Sharky. Absolutely nothing. Wikipedia page has nothing and his name is too common to get much success with Google. If anyone is a member of an All Black or Blues page can you ask? Guy seems to...

When we last heard from Doc he was working at Plumbing World Tauranga. I rang them this morning and was told we hadn't worked there in some time. Decided to just message him and got a great reply. Wish it was always this easy .

Jensen Steel Fabrication is based in Mt Maunganui and provide structural steel solutions. Heres a run down from their website.

We offer all services relating to structural steel, meaning we can manage the entire process efficiently, safely and with optimal outcomes. Supported by our competent and experienced project management and site construction capabilities, we are a true leader within the industry. We are based in Mt Maunganui with a great reputation and proven track record within the Bay of Plenty, as well as servicing the rest of the North Island.

Heres a couple quick clips from their Youtube channel.

Our team have completed many projects throughout the North Island. Commercial, health & education, industrial, infrastructural, sport & recreation and tourism.

Met Doc at plumbing world a few times in Tauranga.

Helpful, knowledgeable and an all round great guy! Didn’t even know about the Warriors link!
Reactions: mt.wellington