Sam Tomkins: Catalans signing says it is a 'good time' for him to leave champions Wigan 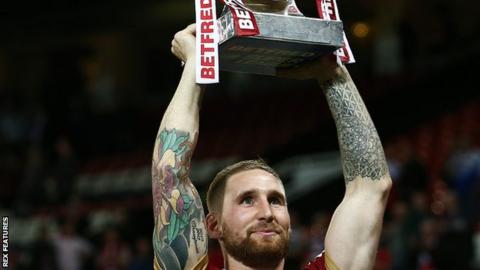 Sam Tomkins lifts the Super League Grand Final trophy for the third - and final - time as a Wigan player
Sam Tomkins says he has no regrets over leaving Wigan for Catalans - insisting a third Grand Final win is the perfect way to round off his Warriors career.

The 29-year-old has signed a three-year deal to join French side Catalans.


"It's just nice that I can go there with my Grand Final ring to match all their Challenge Cup medals," the England full-back told BBC Sport.

"I'm really excited about it. I'm leaving one champion team and going to another champion team. I'm in a very lucky position.

"They [Dragons] are a club that is getting better and better - they are Challenge Cup holders so we have got some silverware to defend next year. I've won one this year, but I can defend another next year."

Tomkins was in tears following the final whistle at Old Trafford on Saturday but said he felt it was the right time for him to move on.

He added: "All week I pushed the emotional stuff to the back of my mind - so that was probably why I was a bit of a wreck for five minutes after the hooter.

"Fairytales come true. It was something I dreamt of, finishing my time at Wigan with another Grand Final ring [to make it] a hat-trick of them.

"It's a special feeling. This win means more to me than any other.

"We are a very successful club and every year we have a huge amount of young talent and superstar senior players, but for me, it's a good time to go."

Tomkins paid tribute to team-mate Dom Manfredi who scored two of Wigan's tries in the Grand Final after almost two years out because of a serious knee injury.

Sam Tomkins (right) celebrates with double try-scorer Dom Manfredi (left) during Wigan's 12-4 Grand Final win over Warrington Wolves
He added: "Dom six months ago was in the worst place a professional athlete can be, mentally.

"What Dom has gone through you wouldn't wish on any player in any sport. It's a cruel, cruel time in life.

"But what he has got is an ability you can't teach. The things that he does when he catches that ball and goes on a mad run, you don't teach kids that, he's just natural.

"That's why, as players, we all knew that if he could get back to anything like what he was before, he would show the same form. He's proved that and I'm absolutely buzzing for him, over the moon."
Show hidden low quality content