Double header in May at Suncorp. Doesn't involve Warriors but for Brisbane based Warriors fans it's...
Storm v GC
Manly v Broncos
Reactions: Johnnyray and Marley 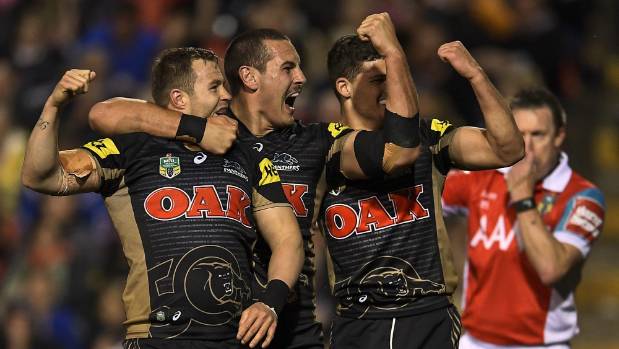 Penrith chief executive Brian Fletcher has called for clubs to be able to review a draft of the NRL draw before its release.

Thursday's draw was hailed as a win for the players, with a 38 per cent drop to 19 five-day turnarounds in 2017, a previous sticking point with the Rugby League Players' Association (RLPA).

However not all clubs were happy.

Penrith are livid they won't host arch-rivals Parramatta, a match that has been in their top-two crowd-pullers for the past 14 seasons with an average attendance of more than 18,000.

"It's one game that would be sold out for sure - it's good for the league, Parramatta and Penrith. But apparently (the NRL) didn't see it that way."

Clubs were given a full list of their home fixtures on Wednesday morning and told the NRL would call around to discuss concerns.

However, Fletcher claims the NRL forgot to include the Panthers in its ringaround.

"Unfortunately for Penrith, the NRL forgot to ring us," Fletcher said.

"I've spoke to them since then and told them we weren't contacted because that's what Todd Greenberg informed us.

"And told them how disappointed we were that we didn't get a chance to discuss it."

Also earning the ire of Penrith was their 6pm Friday evening match against Newcastle in round four, given it takes at least 90 minutes to reach the ground from Sydney's CBD.

Six of the 6pm games in the first 20 rounds are scheduled in New Zealand, but fans who work in the Sydney CBD will have to battle to make kickoff at Belmore, Penrith, Kogarah and Brookvale.

"It'd be the last timeslot you have at Penrith," Fletcher said.

In the future, Fletcher believes all NRL clubs should be brought together as the draw is completed.

"In all businesses, they do a draft and give it to their customers to see whether it works or not," he said.

"If you got all the clubs in the room when they're doing the draw, you're able to compromise with other clubs."

Another club likely to be unhappy is South Sydney, who have been given four five-day turnarounds, while North Queensland, Newcastle, Cronulla, the Wests Tigers and Gold Coast have none.

Regardless, RLPA chairman Clint Newton described as a win the 12-game reduction in five-day turnarounds on last season - which was more than the 25 per cent promise previously made by Greenberg.

"I certainly think it's going to help (the quality of the game) and offset some of the issues which were around last year," Newton said.

"By giving players time to prepare and recover, it's going to add to the competition. It's also going to ensure players play as best they can for as long as they can."

Greenberg hoped that number would drop again next year when the NRL took control of the draw from the television networks, as would their influence over timeslots and fixturing.

"We've made a really strong statement today that player welfare is very important for us," Greenberg said.

The season begins on Thursday March 2 with premiers Cronulla hosting Brisbane at Southern Cross Group Stadium, while South Sydney's Robbie Farah will face the Tigers for the first time the following night at ANZ Stadium.

The grand final rematch between the Sharks and Melbourne will be played in round six at AAMI Park.

The season also includes the World Club Series, Auckland Nines, All Stars clash, the final City-Country match on May 7, State of Origin on May 31 in Brisbane, June 21 in Sydney and then back in Brisbane on July 12, before the end-of-season World Cup.

Only 1 channel 9 game...no surprises there!

You can't ask for much more as a Warriors fan. We got mostly Friday and Saturday games. 3 games in NZ to start. IMO recruiting Foran makes us more attractive to TV. They want to see as many stars as possible on prime time TV.
Reactions: mt.wellington

Contributor
Lot of Friday games for the warriors this year, makes a change, of the 20 rounds announced,

Also loving the ditching Monday night games, find out how the multi or the fantasy team went without waiting that extra day.

And, if past years are anything to go by, it can be good to get that deflating warriors loss out of the way early in weekend, instead of it being a last sour note before Monday morning.

They choose the right game for the Warriors.

Foran first game back at Para.

One argument I did hear for keeping the Monday Night game was that rugby union, AFL and football tended to avoid Monday like the plague, so rugby league had that night's exposure all to itself.

I predict that Friday 8PM could become the new Sunday 3PM slot for games at Mt Smart - I'll watch whenever the Warriors play, but it can get a bit Groundhog Day with all the home games being scheduled for the same day/same time slot.

mrblonde said:
One argument I did hear for keeping the Monday Night game was that rugby union, AFL and football tended to avoid Monday like the plague, so rugby league had that night's exposure all to itself.

I predict that Friday 8PM could become the new Sunday 3PM slot for games at Mt Smart - I'll watch whenever the Warriors play, but it can get a bit Groundhog Day with all the home games being scheduled for the same day/same time slot.
Click to expand...

I for one just love the Friday and Saturday night slots. Far better than Sunday afternoon.
Reactions: SilentOne

Can't remember the last time this happened, but for those of us in QLD - rounds 2 and 3 are on at 5pm (both on Friday). I'll still be at work so thank the lord for foxtel IQ

Old Sid said:
I for one just love the Friday and Saturday night slots. Far better than Sunday afternoon.
Click to expand...

only problem with Friday nights is the motorway can get pretty jammed up for a long period of time. Makes travelling to the game quite frustrating. Where as Saturady and Sunday you can cruise along at your own pace.