I've seen Sio play Loose , he had a decent work rate should go better there then in the halves like last week;
Reactions: mt.wellington

Can anyone give a breakdown re akland?

The Batman said:
Can anyone give a breakdown re akland?
Click to expand...

I'm pretty sure he played Restricted through the international grades and we know who his dad is; TBH I've never seen him play in the open grades cause Mt Albert had rubbish junior teams in the open.

Is this game on yet?

Lord Gnome of Howick MBE said:
Is this game on yet?
Click to expand...

How did the Juniors get on this week?

Sio like his brother - played plenty of lock.
At St Pauls they have like four hookers so they had to play different positions.

Ackland is a half quite young and small but is a genuine footy players so not there purely on name.
Be interested to see how he goes. They have Arthur Critchton from Papakura who played a few games for Counties Prems. However he has had 2 years of knee injuries prior to that.

Nathan Cleary came through restricted grades with Ackland at Mt Albert and one of the best halves in NYC.
Reactions: Defence and mt.wellington 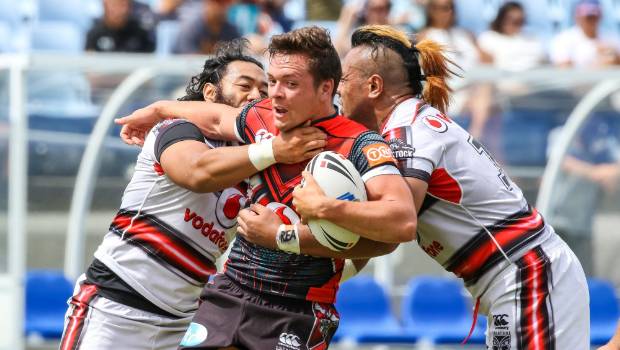 Sheldon Pitama, from the Junior Warriors, takes a tackle in a pre-season trial match.


The 20-year-old hooker is hoping to impress enough this year to earn a National Rugby League first grade contract.

Pitama, who grew up in Tuahiwi, was born to play the 13-man code.

His father, Mathias Pitama, was a tough, uncompromising front row forward for the Papanui Tigers and the Kaiapoi Bulldogs and the Canterbury Bulls representative team.

"I grew up with rugby league," Sheldon said. "Dad was quite young when they had me, so I got to watch him play right up till I was 15."

When Mathias played for the Bulldogs' premiership winning team in 2007, son Sheldon was "at every game, as a ball boy".

He first laced on a pair of boots in a Bulldogs junior team as a six-year-old and advanced through the Canterbury age-group representative grades.

Pitama, who went to Tuahiwi primary school and Rangiora High School, started to specialise as a hooker in his early teens.

At 15, Pitama signed a three-year contract with the Melbourne Storm and moved to Melbourne after completing high school at the end of 2013.

After his Storm contract expired, Pitama crossed the Tasman to sign for the Warriors. It was a logical move for a proud young Kiwi who "grew up supporting the Warriors".

"I'm really happy in Auckland, especially footy-wise," he said. "I think my game has improved with age and experience, as well as practice and I probably feel a lit more comfortable playing for the Warriors. It feels like I've found my feet a lot more here."

Pitama, who is 1.78m tall and 87kg, works for Fulton Hogan as an apprentice drainlayer, but trains "three to four times a week" with the Junior Warriors squad, coached by Kelvin Wright.

The NYC squad trains as a standalone unit, but Pitama said they see a lot of the first graders around the club and "most of them are pretty approachable and willing to help".

It hasn't always been easy for South Islanders to get a gig at the Junior Warriors, but Pitama established himself in the starting side last season, before suffering a season-ending injury.

"I think it was Round 8 against the Titans, I broke my leg in the 80th minute of the game. It was complete bad luck ... we had already won. I was on a runaway, and got pulled down one metre before the try-line. I broke my tib and my fib [tibia and fibia] and was pretty much out of contact for five to six months."

He "spent the first two weeks in bed in Auckland" but returned home to Canterbury to convalesce once he got medical clearance to fly.

Pitama got the "all-clear" to train again and put in a big pre-season in Auckland.

He got a bit of game-time for the Warriors' first grade team in a pre-season trial match against the Gold Coast Titans and he has captained the Junior Warriors in the opening rounds of the NYC season.

Pitama, who led Kaiapoi Bulldogs junior teams and captained the South Island Scorpions, said he was "stoked to be named captain of the Junior Warriors, especially coming off an injury like last year's".

"To come back into the squad as the captain is a big honour. The team has such a good history and quite a winning tradition."

Like their NRL clubmates, the Junior Warriors have lost their first two games, but Pitama knows it is early days yet in the 2016 season.

Encouragingly, he has had no ill-effects from his injury. "The muscles in my leg are still not fully developed, but I feel fine going into a game and getting into contact. I'm not struggling with that, which is a positive."

He said fitness was important because hookers have "quite a big role in organising the forwards and getting the team up the park".

The new interchange rules - with substitutions reduced from 10 to eight - means Pitama is expected "to play a lot more minutes so they don't need to carry another hooker on the bench".

Flying across the Tasman and playing curtain-raisers to NRL games is a far cry from his early days at Kaiapoi's Murphy Park, but Pitama's ambitions don't end there.

"The under-20s is more a foot in the door; it's only the first step. Only a small percentage of NYC players go and play in the NRL.

"I love playing in this competition, but the ultimate goal is to play first grade. The NRL would have to be the dream, this is more an opportunity."
Reactions: Rick O'Shay and mt.wellington

Remember the name Kane Telea . An outstanding prospect,. A young Shaun Johnson type player,not as dumb as Shaun.I hope. Like to think he would have gone for the dropkick. Young Eiden Ackland's a gutsy little player also, Not scared to mix it with the big boppers.
Reactions: Rick O'Shay

Dave Brough said:
Remember the name Kane Telea . An outstanding prospect,. A young Shaun Johnson type player,not as dumb as Shaun.I hope. Like to think he would have gone for the dropkick. Young Eiden Ackland's a gutsy little player also, Not scared to mix it with the big boppers.
Click to expand...

Agree, there were a few players in that side who looked promising. First time I have seen the majority of the team. The two you mentioned also showed up in defence. Was also impressed with Sheldon Pitama. Seemed to have a few clues. Telea looked very composed and was well positioned wherever the ball was. This is a very young side so will be following their progress with interest. I wonder if they will drop Roache, Hingano etc back down for a couple of games, think they're still eligible.

Was very very impressed by Isaiah Papailli - jeepers that kid is good, real good, cant believe he is a prop, has a lot of Sonny Fai big 2nd rower presence about him. I hear he was awarded the best player for the warriors the first 2 weeks and I got to say he was my standout on the weekend also. He is also only 17 years old? wow lock him up NOW
Reactions: Weno and Rick O'Shay

MeetTheMonster said:
Was very very impressed by Isaiah Papailli - jeepers that kid is good, real good, cant believe he is a prop, has a lot of Sonny Fai big 2nd rower presence about him. I hear he was awarded the best player for the warriors the first 2 weeks and I got to say he was my standout on the weekend also. He is also only 17 years old? wow lock him up NOW
Click to expand...

Have to agree with you there MtM you must be a very proud Dad.
Reactions: Jay M

Freddie Futler said:
Have to agree with you there MtM you must be a very proud Dad.
Click to expand...

hush Freddie I told you not to call me Dad outside of the bedroom - your a naughty boy but you like it that way
Reactions: The Cheap Seats, mt.wellington, brightman and 2 others

That Halfback Ioka has first grade written all over him...he will be a very good player if his head is right...the rest of the team looks meh.

We'll be lucky to hang onto him.