Lord Gnome of Howick MBE said:
how did Maumalo get suspended - surley not for anything that requires aggression?
Click to expand...

Mount Wellington rates him based on personal knowledge, so I live in hope
Toggle signature
Trainspotter

Just spoke to TL as he was walking into the stadium and he said his knee was fine and would be back in two weeks.
He is bigger than he looks and solid as a brick shithouse.
Toggle signature
Pay it Forward
Reactions: Stylez Davis, Off The Bench, warriorsfan92 and 3 others

* how did Maumalo get suspended - surley not for anything that requires aggression?

* woohoo - Lousi is back in two weeks!
Click to expand...

Don't worry, Lousi will injury his back picking up a paper clip before then
Toggle signature
For they were Warriors ..... these mighty men of Valour
1 Chronicles 12:21
Reactions: bruce and Canadian_WarriorFan

Freddie Futler said:
Just spoke to TL as he was walking into the stadium and he said his knee was fine and would be back in two weeks.
He is bigger than he looks and solid as a brick shithouse.
Click to expand...

Not straight in I hope, test the knee and fitness in reserves first please, Cause I'd blow another circuit breaker if he did a Benry.
Reactions: Off The Bench, warriorsfan92, tajhay and 2 others

Four Vodafone Warriors NRL players are undergoing further assessment after being injured at the weekend.

Blake Ayshford (concussion) and Manu Vatuvei (ribs) left the field either side of halftime in Friday night’s 10-25 second-round loss to the Brisbane Broncos at Suncorp Stadium.

It is yet to be confirmed when they’ll be available. Likewise interchange prop Sam Lisone has a shoulder injury which is being assessed.

David Fusitua is having an ankle injury looked at after leaving the field in the Vodafone Warriors’ 44-6 Intrust Super Premiership win over Wests Tigers on Saturday.

Back rower Ben Henry is out indefinitely after having surgery last week to repair the broken patella in his left knee while prop Ligi Sao’s return date is yet to be confirmed after he dislocated his left shoulder in the March 20 trial against St George Illawarra in Nelson.

Several players who have been on the injured list could return to action in the next two to three weeks.

Prop Charlie Gubb and wing Ken Maumalo are both available again this weekend after serving suspensions.

The Vodafone Warriors are at home for the first time on Sunday staging a tripleheader for their 2016 debut at Mount Smart Stadium.

Sao, Vatuvei, Luke, Leuluia a chance for next week?

No, Loo loo eyes told me on Sunday he was two weeks away.
Vat two eyes has rib damage that can take ages to come right

And Luke Kneads attention around the groin region.
Toggle signature
Pay it Forward

Any update on Luke?

Three players have come off the long-term injury list and are set to return to the field for the Vodafone Warriors’ Intrust Super Premiership side against Wentworthville in Sydney on Sunday.

Lino, who made his NRL debut late last season, starts at halfback against Wentworthville while Sipley and Lousi have both been named on the interchange.

Set to come back next week are utility Thomas Leuluai (knee) and prop/loose forward Ligi Sao.

Will get to strike off a few more names after this round. For now only Henare Wells comes off the list after playing fullback for the reserve grade...

Warrior Bodene Thompson, left gets past the Storm's Blake Green in the NRL match between the NZ Warriors and the Storm at Mt Smart Stadium on Sunday, march 20, 2016. Photo: Fiona Goodall/photosport.nz

Five players have come off the Vodafone Warriors’ injury list in the last two weeks and another one is on target to return next week.

Halfback Mason Lino (ankle), prop Toafofoa Sipley (knee) and prop/back rower Sione Lousi (wrist) all made successful returns after surgery when they turned out for the club’s Intrust Super Premiership side against Wentworthville last Sunday.

They’re in the ISP side again against North Sydney tomorrow along with front rower/loose forward Ligi Sao, who makes his comeback from a shoulder injury he picked up in the trial against St George Illawarra in Nelson on February 20.

Back rower Bodene Thompson, sidelined since the third-round clash against Melbourne, is scheduled to be available again for next week’s seventh-round game against Canterbury-Bankstown at Westpac Stadium in Wellington next Saturday (7.30pm kick-off).

Wing Manu Vatuvei is out this week after experiencing hamstring tightness 66 minutes into last Sunday’s match against the Roosters. He is expected to be available again next week.

Bodene has been a real standout for me and will be great to have him back.
While the negatives have outweighed the positive of late there are a few great things that have happened like Bodene, Luke and RTS and being a glass half full sort of guy just a few more like them and watch out NRL.

Actually I have a confession, I'm not really a glass half full person, I drink the lot.
Toggle signature
Pay it Forward
Reactions: ramps and Rick O'Shay

Both Manu and Thompson should be back for next week then. Big.
Reactions: Off The Bench 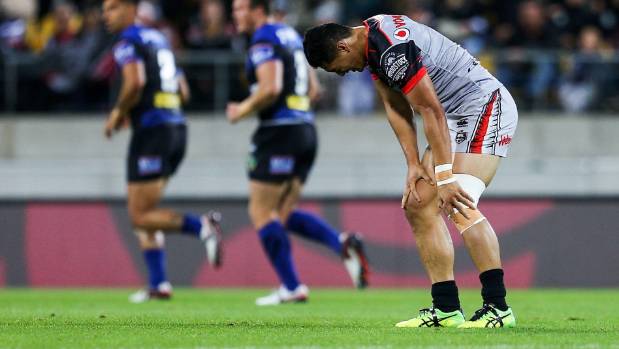 HAGEN HOPKINS/FAIRFAX NZ
Warriors fullback Roger Tuivasa-Sheck had become a passenger by the time he went off injured in the team's win over the Bulldogs.

No news might be good news, where star New Zealand Warriors fullback Roger Tuivasa-Sheck is concerned.

The club's prized offseason recruit succumbed to a knee injury just 18 minutes into the team's 24-20 round seven NRL win over Canterbury-Bankstown at Westpac Stadium on Saturday night.

Tuivasa-Sheck was injured in an innocuous-looking ninth-minute tackle from Bulldogs centre Kerrod Holland. But it clearly affected him and in the few minutes he remained on the field, the fullback spent a few of them down on his haunches receiving medical attention.


The knee was initially strapped, then not, as Tuivasa-Sheck was sent to ride a pitch-side bike, in the hope of loosening the injury up. But defeat was conceded just before halftime, when he limped back to the changing room.

Warriors coach Andrew McFadden was unable to specify what the injury might be, or how severe, after the match. Come lunchtime on Sunday Warriors assistant coach Justin Morgan was little the wiser, indicating the injury might not be too severe.

If Tuivasa-Sheck faced a long spell on the sideline that should've become apparent by Sunday.

"Whether or not it's internal damage or whether he just got a really bad knock on it and made the knee a little bit unstable we're unsure at this point," Morgan told Radio Sport. 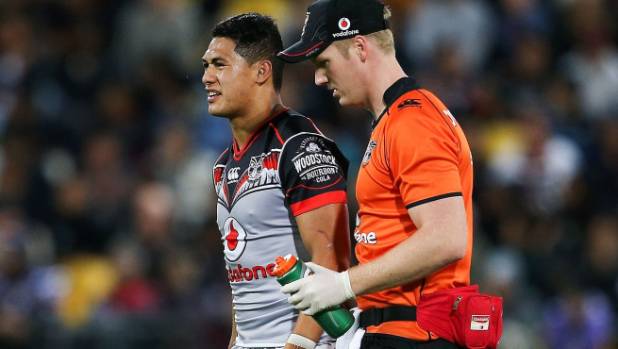 "We should know a little bit more later today or first thing tomorrow."

HAGEN HOPKINS/FAIRFAX NZ
Warriors fullback Roger Tuivasa-Sheck had become a passenger by the time he went off injured in the team's win over the Bulldogs.
Click to expand...

Small ray of light that it may not be too serious.
Reactions: tajhay and mt.wellington

Much of the same from the Warriors site. Wait and see approach. Someone who caught the same plane back said he was walking on crutches...

Scans for Tuivasa-Sheck tomorrow
Sun 17th April, 04:41PM
[parsehtml]<script height="349px" width="620px" src="https://player.ooyala.com/iframe.js#pbid=fd5fc71d2bcc4b60a622cf8d3348d605&ec=dmM3d1MjE6Hr_zHo6SSCd0tszz80R6Fh"></script>[/parsehtml]
Vodafone Warriors fullback Roger Tuivasa-Sheck will have scans tomorrow to confirm the extent of the injury which forced him off the field early in last night’s seventh-round NRL clash against the Canterbury-Bankstown Bulldogs at Westpac Stadium in Wellington.

The 22-year-old needed treatment to his left knee 11 minutes into the game and came off six minutes later.

Tuivasa-Sheck returned to Auckland with the rest of the team this morning following last night’s 24-20 win over the Bulldogs.

Vodafone Warriors head coach Andrew McFadden said details about the full extent of the injury would be made available after receiving results of the scans.

So while we get to take Bodene Thompson off the list we have add Roger Tuivasa-sheck to it. Manu Vatuvei, who was meant to be available against the Bulldogs, has had his return updated to Round 8 against the Storm...

on RTS - Eric Watson was saying its a "serious" injury and not looking good… whatever that means.

When did he say it though? Because Cappy said a similar thing post match and then afterwards an article came out that they thought it wasn't as serious as they first thought.