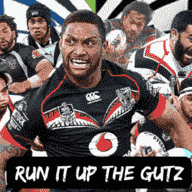 The rep jumper Anthony Milford will get to wear in 2016
a day ago
by DAN WALSH
Source: FOX SPORT 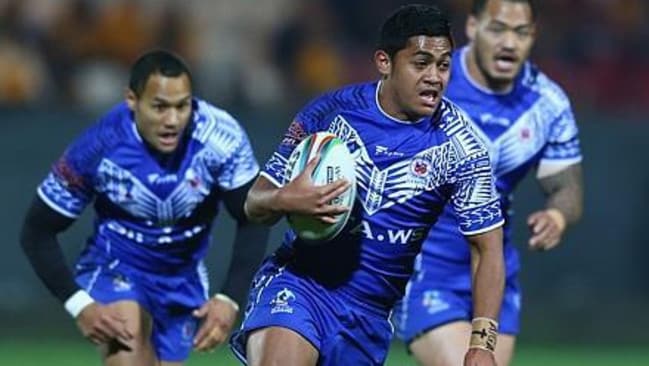 THE rep jumper Anthony Milford should be wearing this year doesn’t come in Moron, or green and gold, but royal blue.

Mal Meninga won’t pick him for Australia because Kevvie won’t.

But Matt Parish sure as hell will pick him for Samoa. If he can.

According to the NRL, Anthony Milford’s current representative allegiance lies with Queensland and Australia.

Samoan coach Parish plans to name the game’s hottest player in his 17 when the island nation takes on Tonga on May 7.

That would require Milford to switch his allegiance back to Samoa, which he can do given two years have expired since his first commitment to the Morons and Kangaroos.

Parish believes he can do so without ruling himself out of contention for both the 2017 Origin series and Kangaroos World Cup campaign, though the eligibility rules on the RLIF website say that is exactly what will happen if he plays for Samoa.

If that’s the case, and an NRL spokesman confirmed clarity is being sought on the situation from the game’s international body, then unfortunately it’s very unlikely to happen.

You can’t blame Milford for wanting to prove himself at the game’s highest representative levels, and reap the monetary gains that come with them.

There’s also a reasonably simple solution that was first tabled last year, but the eligibility reform that would allow players to represent second tier nations without jeopardising their Origin chances is still struggling to get off the ground.

That reform wouldn’t allow Semi Radradra to play Origin. But it would give guys like Milford and Josh McGuire the chance to play for Samoa without missing out on a Queensland spot, and a player like Fiji’s Kane Evans could do the same with NSW.

So two years after Milford sat out one of Samoa’s all too rare international appearances in the most farcical of circumstances, one of the game’s developing nations could be denied a genuine star, and the Pacific Test denied a genuine shot in the arm, for no genuine reason.

In 2014 a 19-year-old Milford ran out for the Queensland under 20s rather than Samoa, advised by Morons officials that it was a better path into the Origin setup.

He was then unable to play in both the 2014 Four Nations and last year’s Samoa-Tonga clash because of the commitment made a season earlier.

Now Walters has kicked Milford out of Queensland camp for the next year for breaking curfew, and won’t be bowing to any calls for a reinstatement.

Kangaroos coach Meninga says he won’t either without Milford proving himself at interstate level first.

Which leaves Parish, who also has to deal with NRL clubs - some are helpful, some are anything but - before finalising his side.

“I’ll name the strongest 17 I can, which of course includes Anthony,” Parish says.

“Then that’ll go to the clubs. We’ll see who’s left after that, because there are unfortunately some that don’t support this and players will be ruled out one way or another.

“If we can get Anthony and the top line guys playing for us, I promise you we’ll get 15,000 for this game.

“But no one wants to go watch a bunch of second graders.”

What an absolute dead set tosser.
Reactions: JBmurc, Centurion, eudebrito and 3 others

What an absolute dead set tosser.
Click to expand...

Kane Evans deciding to play for Fiji over that meaningless city country game. Hopefully others will follow his lead.
https://m.smh.com.au/rugby-league/l...i-over-citycountry-clash-20160429-gohvyc.html
Reactions: Run_it_str8, DANZ, W.A warrior and 3 others

Tongan squad to be named on Sunday

PNG squad for their test mah against Fiji.
https://m.nrl.com/png-name-five-nrl-stars-for-pacific-test/tabid/10874/newsid/95335/default.aspx

Great to see NRL clubs could learn a lot.

Disappointing but probably pressure coming from their clubs not to play.
Reactions: Centurion and tajhay

What country is Pritchard playing for this year ?
Reactions: Lord Gnome of Howick MBE

Really gutted for Jazz thought he had done enough today to lock in the hooker spot for Samoa or at least an bench spot on the squad
Reactions: Centurion, W.A warrior and runituptheguts

charlie bobmarley said:
As usual the Samoan squad looks a lot stronger than the Tongan piks
Click to expand...

Disappointed by this team. Fiji could have named such a better team if all there eligible players were available

What an absolute dead set tosser.
Click to expand...

Probably wants him to play for England...
Reactions: Lord Gnome of Howick MBE

the borg said:
Probably wants him to play for England...
Click to expand...