Shocked to not see Fusitua on the wing over Nightingale, that back line lacks points in them and looks far too
safe. Rapana looks like the only player likely to break a game open.
Kata and Ma'u are good selections. Ma'u deserves his shot, he was the eels' best this season has all the form. Lol at people thinking Kata shouldn't even make the squad, no clue.
Reactions: 1 users

Think they mean he should be playing for tonga, not that he's not good enough.

Big fan of Kata, only warrior outside back interested in tackling in forever.
Reactions: 5 users 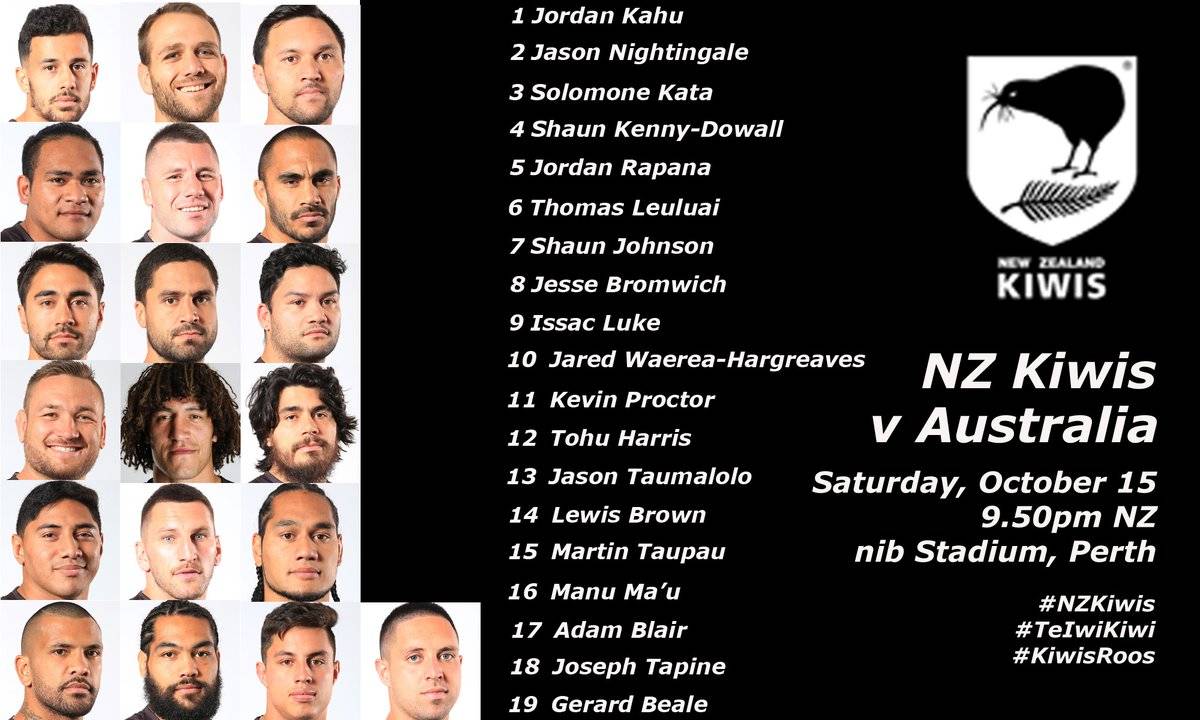 Fusitua is unlucky to miss out I reckon
Reactions: 4 users

Kahu is terrible at fullback. I would have gone Fusitua at the back. Much safer and more dynamic. Aside from that, it's a pretty strong team.
Reactions: 4 users

Well, all the Warriors pundits have said that Shaun Johnson needs a strong forward pack to do his magic. It's there now. Do your magic Shauny J!
Reactions: 3 users

Good to see David Kidwell stamp his mark on the team. Happy to see him bury the hatchet with JWH after being snubbed by Kearney for a while.

That pack is just insane. Big players starting with the house of pain boys coming on next. The battle up front is going to be brutal at times. Cant wait!

If only Foran and Roger Tuivasa-Sheck were ready to rock this team would be unstoppable. Still a lot of work for Shaun Johnson to do but having Issac Luke there helps him a shit load. Shaun Johnson wont have to create it all on his own like he did for this years ANZAC Test.

Would have preferred to see David Fusitua on the wing but Kidwell might have erring on the side of caution and making sure the debutants had seasoned minders pairing up with them. Fusitua will get his chance soon enough. Kids the future on the wing...
Reactions: 8 users

Yep it's a bugger that Kata is not with Tonga, ah well it's all been said before.

Rapt for him making it into the Kiwis from a purely player POV.

Kata fits with the Kiwi Mould of defensive center well. There will be somewhat of a 'trial' aspect to this team named, Kata certainly hasn't secured as berth for the our Nations.

I hope he does.

He deserves it. He is hard working and highly intelligent.

The speed at which he has become a reader of the center position is as good as any I can think of (Certainly has a bit of Dean Whare in him with his one on one defensive reads, the only difference is Whare is way more experienced / a sure thing.

Just like everyone else the only thing you see that lets his game down in the passing issue.

If Kata does indeed play right center, the Kiwis will not lack for scoring options, he and Johnson are a genuine Strike power pairing and will make space for each other by virtue of the threat they pose when running.

The Forwards pick themselves, you can't really say any of them are undeserving.

Brown is a good option to fill in....in Mannerings absence.

Sharky gives them extra dummy half impact options and is a dangerous runner close to the line with lots of threats around him and a besieged Aussie D line.
Reactions: 1 users

eudebrito said:
Only Feki from last years squad can consider himself seriously unlucky, should have had Manu's place.
Click to expand...

Feki unluckly did his ankle in the grand final if you remember, historically considered a fringe international means not a high enough profile to warrant announcing he won't be selected on injury.

Plus the whole week of getting on the piss after winning a premiership. But we wouldn't know anything about that.
Reactions: 3 users

Fazz said:
Kahu is terrible at fullback. I would have gone Fusitua at the back. Much safer and more dynamic. Aside from that, it's a pretty strong team.
Click to expand...

Kahu is safer than Fusitua and is a much better defender.

Im hoping kata is at his traditional left centre. I would love it if they put Fergo at right centre. I want to see the kata v fergo trilogy!!!
Reactions: 7 users

eric said:
Kahu is safer than Fusitua and is a much better defender.

Fusitua definitely offers more in attack though.
Click to expand...

Every try you stop is one less Shaun Johnson has to score. The game plan, as always is to smash them up front. Can't wait.
Reactions: 2 users

bruce said:
The game plan, as always is to smash them up front. Can't wait.
Click to expand...

Going to be easier said than done though. The Aussie pack are all huge. Matt Scott is the smallest of the pack and he's a little over 6 foot and 110 kgs!!!

mt.wellington said:
Going to be easier said than done though. The Aussie pack are all huge. Matt Scott is the smallest of the pack and he's a little over 6 foot and 110 kgs!!!
Click to expand...

Big boys but they lack a bit of intimidation/ aggression with gallen and fafita missing.
I'm stoked they left them out.
Reactions: 2 users

Any sign of who the ref is? Better not be maxwell

mt.wellington said:
The Aussie pack are all huge.
Click to expand...

They are bigger with Gallen gone, but if we are going to win it has to be up front, always has been. I am pleased they haven't got Fafita. He is a grub but a talented grub.
Reactions: 3 users

Yeah i think after the 2014-15 period of sheens the aussies realised they had lost the forward battle mainly due to size. They've realised that by bringing in shanon boyd and other bigger bodies they have to compete for size. The real area to watch is the backrow. we usually win the backrow battle with our tireless storm boys so i expect us to win there, aussie use to have great backrowers they still do but not enough to create points i feel like they use to on the edge.
Reactions: 1 user

That Aussie side is very good, but with Hayne out, the Morris twins off the boil....No more Slater
...it Just lacks the polish and the cockyness of an Unstoppable Kangaroo attack.

The Roos true Achillies heels (there are two on the Human body) are for one thing they now Face Kiwi and England Forward packs that are assured parity in large stages of the game, and the other idea they haven't adjusted to, is that when the momentum swings their way, and they are dominating their opponent, they can't just pull a surgical Origin back line play / NRL set piece with a rappid shift from a Lokyer / Fittler/Langer/Johns/Lewis/ the Immortal types they once had....the go to...money men who were Simply better than everyone else on the Planet.

They aren't allowed to punch each other so they dont.

OK I support the shift away from the violence but what is with these new age Convicts that glass their girlfriends, shit on the floor.....and not a single one of them has the testicles to take a suspension and throw one punch.

Bunch of actors.....I digress in my tongue in cheek way.

Do I want our kiwis to let fly and cop a suspension ? HELL NO.

We got some tough hombres.

Guys that did shit then grew up and left childish things behind them.

Looks to me like Kidwell is assembling a barbarian horde of the South seas variety.

He's got some serious thugs in his team and some SAS go all day and all night Sargeants thrown in (only Cpt Mannering the toughest Kiwi player of the lot is missing)....but hey....he's been operated on so he can go to war too....as such I would have kept him at Cpt....as much as I love Jessie B....Mannerings done long service.....still....I get the winds of change when a new General takes charge of Army.

All we need to stay number one is for our forwrds to play as a group.Our backs might not be the best, but if this were the NRL.....and this New Zealand team had been signed by the Warriors......hypothetical.... But....how confident would you be of us finishing first ?

This side is a Kiwi dream team, awaiting Foran and Roger Tuivasa-Sheck to make us red hot favorites every time we roll out ?
Reactions: 1 users

Danm fusitua should of made it tbh
.. he's better than everyone in that Backline and had shown that he can play Centre wing , fullback and still produce the goods .
Reactions: 1 user

xWarrior said:
Danm fusitua should of made it tbh
.. he's better than everyone in that Backline and had shown that he can play Centre wing , fullback and still produce the goods .
Click to expand...

Apart from Kata, they are mainly all experienced Internationals. A game like this againstt Australia is not the time or place to blood him. I'd like him to face Scotland, either as a winger or fullback.
Reactions: 3 users
Show hidden low quality content
Share:
Share