Still a marquee signing for the Penrith Panthers. Suffered a late season injury in 2014...

Unsure what he's up to now but meant to be back in NZ after leaving Salford. Will need to revisit this post soon... 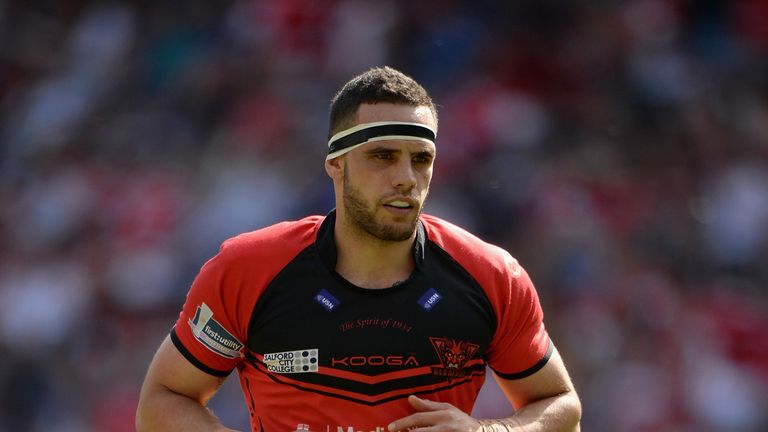 The 25-year-old forward, who joined on a two-year contract from New Zealand Warriors last September, has been an ever-present since Iestyn Harris took over as head coach in April.

He will miss Sunday's Super League game at Wakefield after flying home but is hoping to return before the end of the season.

"At the moment he is planning to return."

"We will keep in further discussions with Steve ," said Salford chief executive Martin Vickers. "At the moment he is planning to return."

Vickers also confirmed that Australian scrum-half Tim Smith, who made his Red Devils debut against Wakefield in February, will be free to face his parent club on Sunday.

Smith, who is under contract with Salford next season, rejoined the Wildcats on loan in June and the Yorkshire club are hoping to make the move permanent.

Steve Rapira has signed for the Mackay Cutters...

Josh Benjamin is off to Redcliffe next season. SMP Images

IN a major coup for the Mackay Cutters, former North Queensland Cowboys, New Zealand Warriors and Salford Reds’ forward Steve Rapira has signed with the club. It will continue a rugby league career which has included 57 games in the NRL and UK Super League.

Samoan Test hooker and 2013 Warriors NYC Player of the Year Michael Sio has also signed up with the club and is looking to make his mark in the Intrust Super Cup competition and boost his chances of securing an NRL contract in the near future.

Steve Rapira has signed for the Mackay Cutters...

Josh Benjamin is off to Redcliffe next season. SMP Images

IN a major coup for the Mackay Cutters, former North Queensland Cowboys, New Zealand Warriors and Salford Reds’ forward Steve Rapira has signed with the club. It will continue a rugby league career which has included 57 games in the NRL and UK Super League.

Samoan Test hooker and 2013 Warriors NYC Player of the Year Michael Sio has also signed up with the club and is looking to make his mark in the Intrust Super Cup competition and boost his chances of securing an NRL contract in the near future.

Playing for the Wakefield Wildcats. Playing really well by all accounts and is fast becoming a fan favourite. Was actually voted Peoples Choice at the Wakefield awards night...

Warrior at heart Pita Godinet has no regrets
CHRIS BARCLAY

OVERSEAS EXPERIENCE: Former Warriors utility Pita Godinet has no regrets about leaving the Auckland club and linking up with Wakefield in the Super League.

Pita Godinet has just completed training at The Showgrounds overlooking Kiama surf beach, south of Sydney. Although he is closer to home, the Samoan international has no qualms about returning to the north of England.

The 26-year-old's move from the New Zealand Warriors to the Wakefield Wildcats at the end of last year raised the usual cultural and climatic issues yet, as a career move, Godinet's OE has proved an unqualified success despite his Super League club struggling this year.

Christchurch-born Godinet made just 18 appearances for the Warriors during three years spent largely on the fringes of the first grade squad at Mt Smart following a try-scoring NRL debut against South Sydney in 2011.

Ranked behind Lance Hohaia, Aaron Heremaia and then Nathan Friend at hooker, Godinet - who played reserve grade for the Auckland Vulcans from 2008 - was also unable to force himself into the Warriors' halves combination so he and wife Caroline decided on a working holiday to the UK.

They were grateful to catch up with loved ones in Samoa, New Zealand and Australia during the Four Nations tournament - last month's week in Apia was particularly welcome.

"My grandfather still lives in Samoa, and I've got aunts and uncles over there so I popped in," Godinet told Sunday News. "It's always good to go back to the islands and see where our parents grew up and how they survive."

Yet the family time and warmer climes did not mean they were reluctant to return to West Yorkshire, an English winter and the final season of his deal.

"There have been some tough challenges but credit to Wakefield's staff and all the players - they've made us feel welcome.

"That's important, especially for my wife.

"Really, it was up to her to make the decision [to join Wakefield]. She loves it."

Godinet admitted the couple, who were married in 2010, were apprehensive about leaving family but it had broadened their horizons. "One thing we were scared of was venturing on our own path. She hadn't been away from her family before, being over there has opened her eyes up a bit more," he said.

They have already visited Belgium, Turkey and France. Their potential destinations are endless, he said excitedly: "We both want to travel, it's a two-hour flight to places I had never heard of before."

The only downside is they miss a festive season with their parents because of a traditional Boxing Day fixture with Leeds. "It's a bummer, rain, thunder, or storm. Even in snow, they'd still play."

Adapting to life in England's league heartland can be challenging - Isaac John, another former Warrior, struggled to settle in Wakefield before heading to Penrith last year - but Godinet is hoping to prolong his stay after notching 23 appearances in his maiden Super League campaign.

He didn't want to leave the Warriors and still follows the club's progress from afar.

"I love the [Warriors] boys but I got an opportunity at Wakefield and I've been playing pretty much the whole time. I've been learning a lot of stuff as well."

Was released by the Warriors to join Super 15 Rugby Union club the NSW Waratahs... 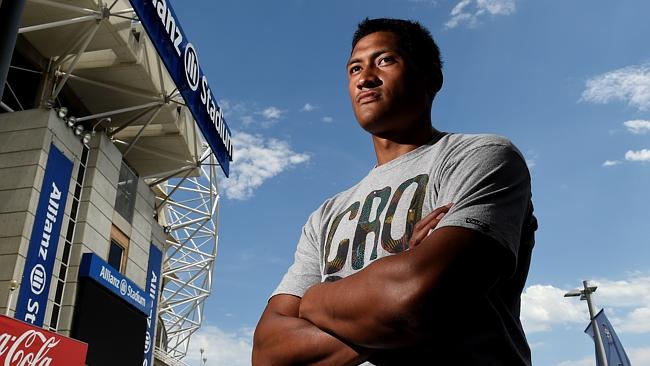 Sam Lousi is a huge addition to the Waratahs squad.

IT was a sales pitch that would have sent lesser men running.

Michael Cheika sat in the lobby of an Auckland hotel with Sam Lousi and his parents, and urged him to leave home and the safety of league to switch to rugby union and work harder than he ever had.

“But it really appealed to me,” Lousi said in his first interview since joining NSW.

“I was too comfortable. I could have easily relaxed and stayed where I was, but I wanted the challenge.”

That is the type of attitude that would have attracted Cheika to Lousi in the first place, as well as his extraordinary measurements.

The 198cm, 126kg giant is now the second-biggest Waratah behind Will Skelton, and has been hired to fill the gaping hole left by the departures of Wallabies locks Kane Douglas and Sitaleki Timani in successive seasons.

But that’s not the main reason Lousi has made the switch from the NRL to join the Super Rugby champions.

When Lousi would wake up early in his family’s Auckland house, heading out the door to train with the New Zealand Warriors, he would often pass his mother who was coming back in from work.

Lousi’s mum Mele has for years worked the graveyard shift as a caregiver, doing the 11pm-7am shift to make ends meet.

She and Lousi’s father Viliame, a mechanic, work tirelessly to look after Sam, his older brother Sione – an established Warriors star – and four older sisters in their Avondale house.

“I would see her walking in as I left for training, and I would think ‘I don’t want her to do this anymore’,” Lousi said.

“I had a year left on my Warriors contract, I could have taken it easy and given her the money from that but I wanted to think long-term.

“I want to learn as much as I can in rugby, and hopefully things can fall into place and I can look after my family for years to come.”

A meeting between Lousi and Cheika was facilitated by Sydney Roosters trainer Craig Walker, who used to be the Warriors’ trainer and has become a friend of Cheika’s since moving back to Sydney.

“I got a text one day asking if I wanted to play for the Waratahs, and I thought it was a prank because the boys are always playing pranks,” Lousi said.

“I didn’t have Craig’s Aussie number so I told him to bugger off, then he called and told me it was him.

“He asked if it was okay to forward my number to Michael Cheika, and I met him when he came over during the Bledisloe Cup match at Eden Park.”

Cheika’s pitch had Lousi hooked, and he was granted a release from the Warriors, for who he played three NRL games including their 48-0 demolition of Parramatta on July 12.

Lousi has only had one season of union, at school as a blindside flanker, and has been diligently learning the art of jumping for lineouts and pushing in scrums as he builds a career in the 15-man game.

But Cheika has a knack for turning gambles into gold; exhibit A being Jacques Potgieter, who Lousi would love to emulate in 2015.

“I was still living at home, I had all my friends around me, I had it all going for me, but I wanted to grow as a person,” Lousi said.

“I miss my family a lot.

“But Cheika said to me; ‘We don’t want you to come and relax, we work hard at the Tahs’. He said he rates hard work over talent, and that really stuck with me.

“It was hard for my family, and especially my mum, for the baby of the house to leave but they understood that it was in my best interests and they supported me.” 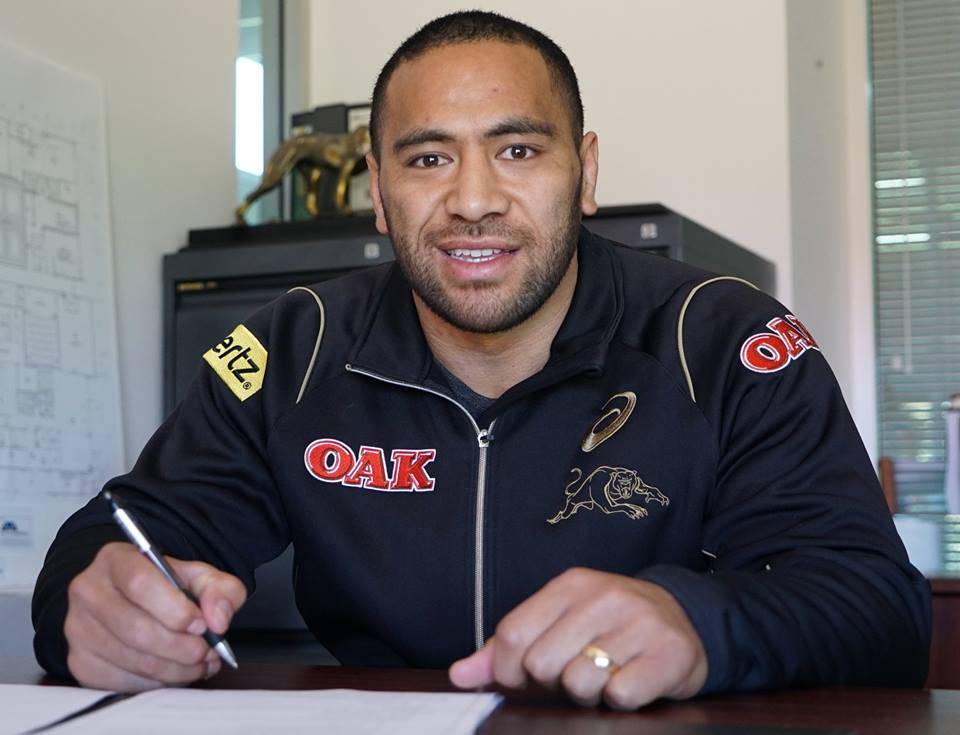 General Where are you now?
2

Jan 14, 2008
MightyWarriors_old
General where are all those brent webb critics now