drake83 said:
Yea its very Rugby dominated here in the Manawatu and cant see that changing with the Turbos winning whatever they won, I just want the cycle broken and some good league players to come from here. The ones I can think of are Ngani and maybe the Nikorimas, maybe that 15 year old the cowboys signed this year too Ponga. Created a slew of All Blacks and super rugby players over the years tho.
Click to expand...

Gone to the Dark side but James Tamou is from Palmy isn't he.?
Reactions: mt.wellington

Gizzyfan said:
Gone to the Dark side but James Tamou is from Palmy isn't he.?
Click to expand...

And the best of them all 'King Carlos'

Best at throwing intercepts, I still remember screaming at the screen, don't pass. Being a BOP man it should have been Glenn Jackson for the AB's that year.

I still wish he'd gone to the Broncos when he had that big money offer... he would have been amazing at league behind that Broncos pack.

Yea i thought about him but wanted to keep it league related. Ol toffee pop has come along way since being a trolley boy.

Contributor
ramraider78 how'd it go at the trial today dox???

First game was rubbish lol a lot of those guys were unfit an unskilled, suprised esera esera played in that 1.

A few union boys had a Crack, a lighting quick Fijian winger looked good but didn't get clean ball much.

Visesio stetefano played 2nd game there's your mose masoe there, he just looked unfit an both his knees were heavily taped.he has masoe size and can bend the line.2nd game was OK.

3rd game was the best an had a lot of past nyc faces in it. A bit of dropped ball here an there.willie Stowers looked good.Jethro friend best hooker out there just to slow with ball 8 hand.i saw another hooker quick out dummy half decent pass just not as smart as friend, he was a muscle man .

About 4 guys got a 2nd game from what I saw.
Reactions: mt.wellington 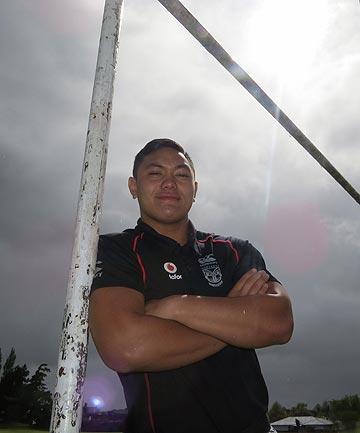 And his success was sweetened by a place in the New Zealand Maori Squad as well.

The 19-year-old was offered a two-year contract with the Warriors on his third attempt.

He said his failures did not bring him down, they only fuelled his desires more.

All of the extra weight training and 5am starts paid off for the 95kg centre and second rower.

''I had to put on a bit of muscle to cope with physical hits on the field, especially with the big boys in Auckland.

Breaking into the Warriors was his main goal this year but the NZ Maori Squad selection was a bonus. To top it off his older brother Zane, who plays for the Manly Sea Eagles, was selected for the Maori Squad too.

Despite always being referred to as ''Zane's little brother'' Isaiah hoped for the same future as his sibling.

''I want to play for the NRL, to follow in his footsteps but make my own path as well.''

He said both parents were proud, particularly his mother.

''She was always the loudest on the sideline ... her and my Nan were yelling at us.''

But it was not always that way; Cooper-Tetevano was not allowed to play at a young age.

It seems the ''crashes and bashes'' in the game could not keep him away.

''My Mum never wanted me to play league but at the age of 13 I had enough, I used to sneak out to games.''

He spent a couple of months hiding the secret until his mother figured it out.

Now he could not have asked for better supporters than his family, friends and coaches.

''I'm thankful for all the people who have sacrificed their own time for me with training and support.''

Warriors academy and pathways manager Duane Mann said Cooper-Tetevano was one of the 200 players selected for a trial game this year. And out of those he was one of two offered a contract for the 2015 season.

Mann said he had been on their radar for a while.

''We think he's mature and he has some versatility to play in different positions.''

He said his selection was based on his ability to make it as an NRL player.

Not only do the young players have to keep up with training five-days-a-week they also have to secure part-time study or work.

The praise from Tokoroa High School principal Willie Ford and the work in the community helped with the decision as well, he said.

Cooper-Tetevano will start off-season training next week until the new season starts in March.

mt.wellington said:
Only other one I know is Tony Kemp...
Click to expand...

Contributor
Forgot where the thread was that had info on another Wellington clinic but we have more visitors coming to our shores...

mt.wellington said:
Forgot where the thread was that had info on another Wellington clinic but we have more visitors coming to our shores...

The Rubbish thing is the local council/govt would pay for it all and jsut Knights turn up.
Then made out to be Development.

Knights have a long relationship with Wellington - Ken Laban gets kids there I bleive.
If they want to get the best kids Wellingotn would be an easy place to identify them.
Local League Rep teams & First XV.