In the signings thread
Reactions: mt.wellington

Lord Gnome of Howick MBE said:
In the signings thread
Click to expand... 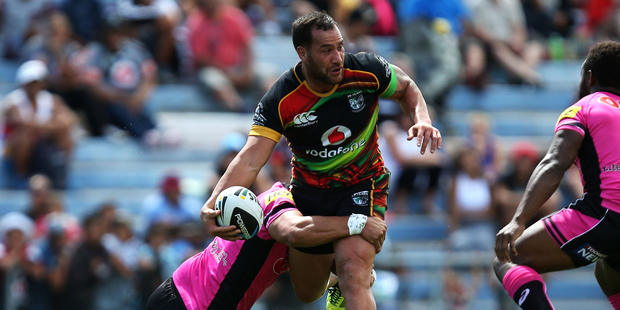 Manly's torrid NRL campaign has gone from bad to worse this week but Bodene Thompson knows they cannot be taken lightly.

Reports over the Tasman indicate the Sea Eagles are planning to release 14 players ahead of next season and relieve head coach Geoff Toovey of his duties.

Star Dale Cherry-Evans had to watch the second half of Monday's defeat to the Cowboys in the sheds, after aggravating a shoulder injury, and they're 13th on the ladder.

They've qualified for the last 10 finals series and must beat the Warriors tomorrow to keep their faint hopes alive.

Their predicament could galvanise the players and Thompson said the Warriors are well aware of the threat they pose.

"They're a tough team Manly," he said. "They're going to fight their way back up and they're always going to be a competitive team. They've got heaps of great calibre players.

"They'll fight to the end because they've always been that kind of team, with how they go in finals."

Manly have won three of their last five in the NRL and they beat the Warriors 22-12 at the end of July in Auckland last season.

The Roosters comfortably beat the Warriors 24-0 last weekend and head coach Andrew McFadden knows they have to improve if they stand any chance of winning this weekend.

"They're still chock-full of talent and they've got a lot of quality," he said. "Their halves are first class and we're going to have to play a lot better this weekend to win.

"I'm not putting too much attention with what's happening on their side. Through the week we focus on our own performance. I don't actually know their situation at the moment and we're more worried about ourselves."

Manly should also be wary of the reaction they could face from the Warriors as Thompson said they were hurting from their humbling in Sydney.

He said: "We're obviously not feeling too good with the loss. It's just one of those things that we've got to put behind us and get improvements out of it to go into this week to prepare ourselves. It is a little kick up the butt and it makes us realise what we have to do."

He's clearly not 100% but we should enough to win this without relying solely on his running game.

Forwards need to absolutely dominate them the way we were dominated up the middle last weekend. If we do that and target DCE the rest should take care of itself.

I gave the bastard an extra hard slap on the shoulder
Reactions: Johnnyray, InsideBall, Mr Brownstone and 3 others tajhay said:
Thrilled to see the fish back. Really hope he can deliver on all the promise he has shown...and stay uninjured for the full 80.
Click to expand...

he could be exciting

Even more reason for the Fish to pull out a good performance with 2 players completing for his spots released this week...
Reactions: ryno

Fish has always plays well .He just had some bad luck , With a few little
Niggles but should be right now, He is all class ,