7 of the premz boys went out the night before to a night club and were hazey at the game reason why they played shit - only found out when someone at the night club posted FB pics of them there and we were looking at them that arvo. And for the record for any Tigers supporters on here we didn't throw the game ,latest rumor flying around the fox comp
Reactions: 1 user

Cutting straight to Round 15. Happy to see Otahuhu beat Otara but it was expected. There was joking around in the club after that they should have thrown the game by a big margin so Northcote would get relegated. No one wants to drive all the way over the Shore to play them lol...

Top 4 semi finalists are all locked in. One of the money teams Howick will miss out. Truth is they dont have the money they use to. Hearing that one of the Board members walked off and took their sponsorship with them. Of course when the money ran out so too did the loyalty of the players lol. Looks like Howick will go back to being a pissheads club. No sympathy from me. Feel free to cry if thats your money team.

Good on Marist for stepping up. Have to say they are arguably the most talented club in the country. In terms of producing players that go onto play NRL theyre right up there.

My team Otahuhu played Instant Finance. Tevita Latu ripped them apart with a boss performance. They will be hard to beat come finals time. Should be a Mt Albert v Pt Chev Grand Final...

Grand Final on today for the top grades. Sharman Cup has already started. Will be going to the Fox final... 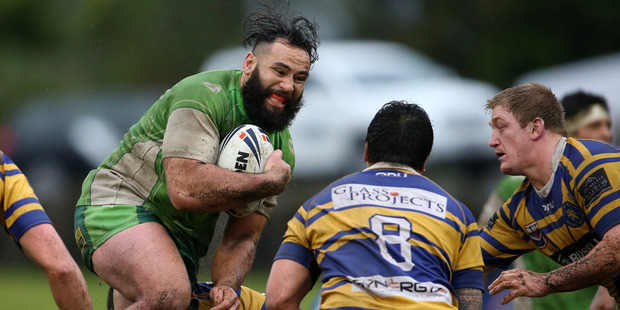 The Point Chevalier Pirates face off against the Mt Albert Lions in 2014. Photo / Jason Oxenham

Police are investigating allegations that a group of league players played a part in throwing a bottle into a window that shattered and caused injury to a woman.

However, the team of those accused - the Point Chevalier Pirates - says the allegations are baseless and "underhand tactics" from their opponents - the Mt Albert Lions - ahead of the grade final today.

He said the allegations were coming from within the Mt Albert Lions club and their supporters - who they were due to face off against in the Fox Memorial Cup final match.

An Auckland City police spokeswoman confirmed that officers were "investigating an incident at a party in Auckland". She could not give any further detail.

Photos and commentary about the woman's injuries - allegedly sustained after a bottle was thrown into a window, shattering it and spraying glass into her face - were posted to Facebook accusing members of the Pirates of doing the damage.

Mr Poole said the allegations were "social media nonsense" and that players were considering legal action under the Harmful Digital Communications Act.

"It is completely unfounded. There is no substance and there is nothing to the allegations," he said.

"People [use] some underhanded tactics to try and put people off the game and it's pretty nasty."

Mt Albert Lions manager Bill Werry said there was a lot of rumour and gossip surrounding the incident, but welcomed the outcome of the police investigation.

"I have seen the photo and if [the accused] goes through the New Zealand police and the justice system I am sure justice will served. If not, I feel for [the accused] if he has been falsely accused."

Auckland Rugby League chief executive John Ackland said he would not comment on the matter if it was under police investigation.

NZ Rugby League spokesman Grant Chapman said there was no obligation for the club to report the incident to them.

"Our jurisdiction is mainly around on-field or sideline incidents, and we are guided by the legal system on incidents such as this."

Pt Chev took out the Fox Memorial for the three peat. Richmond won the Sharman to get back into the Fox and the Marlins won the womens title...