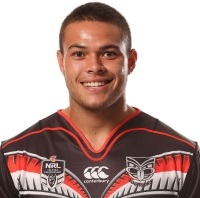 A player destined for a big future in the game, Lolohea left his imprint on the NYC in 2013 when, as an 18-year old, picking up 22 tries playing in all of the Vodafone Junior Warriors’ 28 fixtures. His dazzling feet, speed and skill saw him collect the club's TNT NYC Young Player of the Year Award. During his career he has made his mark on the representative scene featuring for the NZ Residents 16s and 18s as well as the Junior Kiwis. A Kelston Boys’ High School product, he was named in the club’s squad for the inaugural NRL Auckland Nines and has been re-signed to the end of the 2017 season.

He played in the club’s 2014 NRL trials against Gold Coast and Brisbane, scoring two tries against the Titans. While eligible for the NYC again this year and next year as well, Lolohea is being developed in the club’s New South Wales Cup team. However, he turned out for the Vodafone Junior Warriors in their third-round match against North Queensland in Townsville, inspiring them to a 50-12 win with a hat-trick.