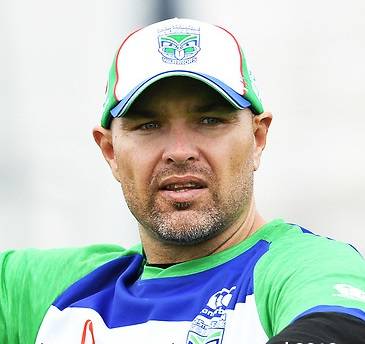 Todd Payten (born 18 January 1979) is an Australian professional rugby league coach and former player, who is currently the caretaker head coach for the New Zealand Warriors in the National Rugby League. He previously played for the Wests Tigers, Sydney Roosters and Canberra Raiders in the National Rugby League competition. He primarily played as a prop-forward. He had previously had coaching roles with the Wests Tigers and the North Queensland Cowboys in the NRL.

Born in Sydney, New South Wales and raised in Temora, New South Wales. Payten played junior rugby league for the Temora Dragons and signed a scholarship with the Canberra Raiders when he was 16.

Todd was educated at Erindale College, Canberra and represented the 1996 Australian Schoolboys.

Payten had played just 2 reserve grade games for the Raiders when he made his first grade debut with the club in 1996 as a 17-year-old.

Over the next few years he gradually made more appearances for the Raiders, initially playing from the bench, until he cemented a position as starting prop in 2000. He was a member of the Raiders team that played semi final football in 1997, 1998, 2000 and 2002.

Released from the final two years of his contract with the Raiders, Payten signed with the Sydney Roosters. Having won the 2002 NRL Premiership, the Roosters traveled to England to play the 2003 World Club Challenge against Super League champions, St Helens R.F.C.. Payten played from the interchange bench and scored a try in the Roosters' victory.

After being released by the Roosters, Payten joined the Wests Tigers in 2004, which meant he was being paid by three clubs. Coach Tim Sheens said of the signing, "We had players like Johnny Skandalis who could take the ball up but what we were looking for was someone with a little bit of nous around his game."

Payten was a member of the Wests Tigers side which won the 2005 NRL Grand Final, scoring a try in the final minute of the game.

In 2010, Payten was named in the Australian train-on squad for the Four Nations. During that year's semi-finals, Payten suffered an injury to his ankle when he stepped on a tennis ball. He took no further part in the season, and missed games at the start of 2011 with knee and ankle problems. In an effort to return to full fitness, Payten underwent experimental stem-cell therapy, saying, "At the moment I'm retiring unless this works dramatically.".

In early June, 2011, prior to the week 13 clash against the Newcastle Knights, Payten announced that it would be his last season, after being one of an elite few players to have amassed over 250 games in the NRL. Payten said, "This isn't the way I wanted it to finish. If I'm really honest with myself, I'd be hard-pressed to continue on the way it's going at the moment. I can't." Already a certificate-2 level coach, Payten said he intended to pursue coaching in the future. Payten made a few more appearances off the bench towards the end of the season, but was unable to participate in the semis due to another injury
Share:
Facebook WhatsApp Email Share Link