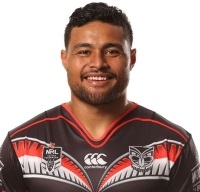 You are using an out of date browser. It may not display this or other websites correctly.
You should upgrade or use an alternative browser.
Overview Twitter Multimedia Gallery Discussion

Sipley is another young talent off the production line that is St Paul’s College. In addition to representing his school, Toafofoa shot through the ranks at the Richmond Rovers. Breakthrough came in 2013 when he earned a place in the Vodafone Junior Warriors squad and the NZ Residents 18s for their Australian tour. Sipley took the field on 10 occasions in his debut season for the club, bringing a strong work ethic to the prop position. Toafofoa is also hard at work in the classroom as he is studying towards a Bachelor of Education.

Made his NSW Cup debut in 2015 Round 12 against the Newcastle Knights but was carried off the field after 10 minutes with a knee injury.

Made his NRL debut 1st May 2016 against the St George-Illawarra Dragons in Round 9. Was called up after a number of players were disciplined in a fiasco dubbed the Shameful Six.