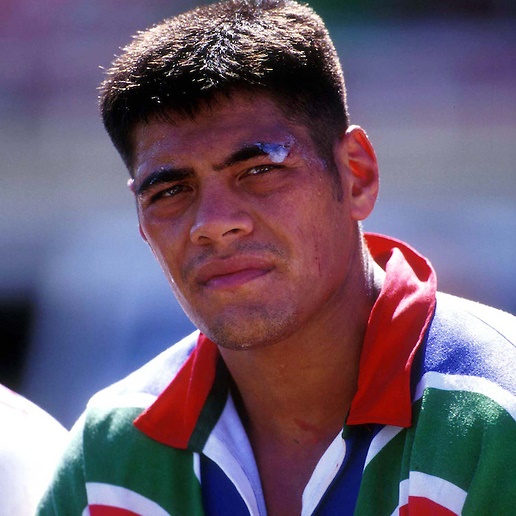 Junior Kiwi representative captain showed tremendous promise in Wests’ President's Cup grand final win over St George in 1992. Kearney developed into an accomplished ball-playing forward in 1993 and toured England and France with the Kiwi national side at the end of the year. He became the youngest player to captain NZ in a Test match that year (21 years 148 days, against Great Britain) but, incredibly, was injured when he fell from the balcony of a French hotel after the fixture collapsed. Kearney signed with the Auckland Warriors in 1995 but was frustrated by the club’s inconsistency and quickly found himself offside with club officials. In 1997 he led NZ to victory in the inaugural World Nines (Super League) competition in Fiji. He captained NZ in the ANZac Test the following year but was overlooked as leader in favour of Matthew Ridge and Quentin Pongia in the two Tests against Australia in September 1998. When a consortium headed by Graham Lowe brought the Warriors club in 1999 Kearney joined Melbourne but was suspended for a dangerous tackle early in the season and missed the ANZac Test. Cleared to play his part in Melbourne’s grand final victory after he was cited for an alleged high tackle on Parramatta’s Jason Smith, Kearney was again suspended in 2000 when his reckless tackle of opposing centre Jarrod McCracken eventually resulted in the W’Tigers captain’s early retirement. Kearney was a member of the NZ World Cup team in 2000 and was one of the Storms’ best players in the disappointing 2001 season in which the club failed to make the play-offs for the first time. In 2003 Kearney became the second-most capped player (44 Tests) in Kiwi Test history and captained Melbourne to the semi-finals in successive years before leaving Australia to see out his career with Hull in 2004.