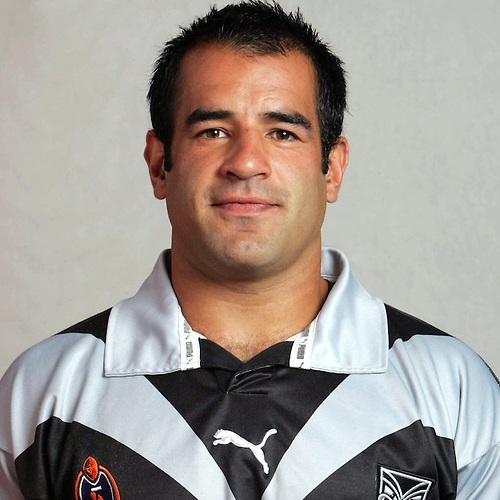 Former Junior Kiwi Test captain made his mark as a 19-year-old halfback in the Warriors’ debut season.

The grandson of Maunga Emery, NZ international halfback of the 1960s, Jones was selected in the Kiwis’ World Cup squad at the end of 1995 and was a regular visitor to the Test arena during the next decade. In 1999 he became the first Auckland player to pass 100 first grade games but missed NZ’s Tri-series campaign when he broke his wrist in a warm-up match against Tonga.

A member of the 2000 World Cup team that was beaten in the final by Australia, Jones’ great form was a highlight in the Warriors’ 2001-02 seasons in which the club first made the final eight and then qualified for the grand final against the Roosters.

Jones won the ‘Golden Boot’ award for international player of the year in 2002 but after 34 Tests his club form wavered and he suddenly seemed to be out of favour with Warriors and NZ national coach Daniel Anderson.

The record holder for most games for the Warriors, and the leading point-scorer and try-scorer in his decade with the club, Jones announced that he would be joining French Super League club Les Catalans in 2006. He finished the year be starring in NZ’s stunning 24-0 victory over Australia in the final of the 2005 Tri-Nations competition. A year later he again rejoined the Kiwi Test team but announced his international retirement following NZ’s 16-12 loss in extra-time against Australia in the final of the Tri-Nations competition in November.

To this day Jones holds the Warriors record for most points and games. Also the 2nd highest tries scored behind Manu Vatuvei.