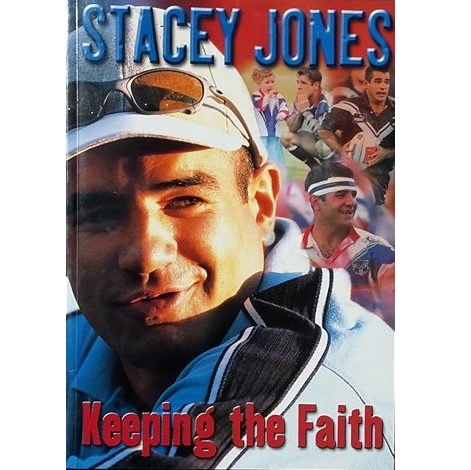 Stacey Jones confounds you from the first moment. He is the greatest New Zealand league player of his generation but you wouldn't know it. There is no 'look at me' attitude. Mana? Yes. But the diminutive star meets you with a handshake and a smile. Its all the same for everyone... executives, the media and the fans.

This is not the intimidating experience you would have thought it to be. Maybe its because he's genuinely happy in his work. Maybe its because he's every day he pulls on his game jersey he is stern on the outside but laughing on the inside as he remembers how it all began... and how he made his debut for the Warriors two years ahead of schedule.

When I look back at that first year, though, there are more good memories than bad ones. After we beat Cronulla, we won seven of our next eight games before our play-off chances ended with losses against St George, Canberra and Brisbane. There are so many high points of that first season. I remember playing Canberra at Ericsson. It was a great game. We lost, but I can look back and smile in the knowledge that I was out there playing against Laurie Daley and Ricky Stuart. Even now and even though Im a professional, Im a fan of rugby league first of all. I love this game and I love the characters with in it. I have always been curious and to this day I bug guys like Kevin Campion and Ivan Cleary because I want to know what its like to play State of Origin or what its like to play alongside Mal Meninga.
Share:
Facebook WhatsApp Email Share Link