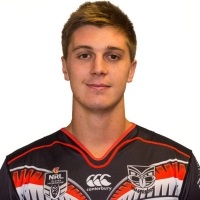 Born in Sydney, New South Wales, Lane played his junior rugby league for the South Eastern Seagulls, before being signed by the Canterbury-Bankstown Bulldogs.

In 2013 and 2014, Lane played for the Canterbury-Bankstown Bulldogs' NYC team.

On 29 March it was announced that Shaun Lane had signed with the Warriors in a player swap for Raymond Faitala-Mariner.

What do you like to do away from football?

Away from football I like to go to the movies, play video games & board games.

What was your first job?

My first job was as a Teachers Aide.

What are your goals in Rugby League?

My main goals in Rugby league would be to play 200 first grade games.

What do you love about Rugby League?

The thing I love most about rugby league the adrenaline & mateship

Who has been the biggest influence on your career?

My biggest influence would be my parents and brother.

What is your earliest league memory?

My earliest memory in Rugby League is crying every time I got tackled when I was five!

What is your best moment in league so far?

My best memory in rugby league was getting Man of the Match during my third NRL game at Belmore, such a great atmosphere and surreal experience.

Best piece of advice you have been given?

Be patient and persevere through tough times.

What advice would you give to a young rugby league player?

Who is the player you looked up to as a kid and why?

The player I most looked up to is Andrew Johns; he was the best player I have ever seen.

What are your memories of your first NRL game?

My first memories of playing NRL were getting told I was playing on the Thursday afternoon by Des. Running onto the field was amazing and supporting Josh Reynolds as he made a break against the Titans, it was a dream come true.

Favourite sportsman and why?

My favourite sportsman is Michael Jordan, he always found a way to win.

What can’t you live without?

What player do you most enjoy playing with/against?

I enjoyed playing against Alex Johnstone; he is lightning quick and a great competitor.

What is the TV show you never miss?

The TV show I can’t miss is Game of Thrones.

I would love to travel the world one day.

If you could play another sport, what would it be?

I would love to be a professional Basketball player, the boys call me “mini giraffe” so I think I would fit the bill.

If you weren’t playing league, what would you be doing?

If I wasn’t playing league I would be completing a University degree.

How would you like to be remembered at the end of your career?