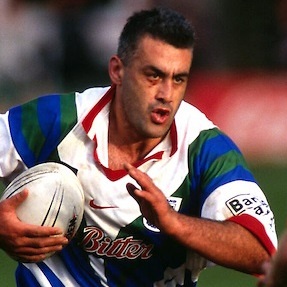 Kiwi prop came to Canberra from the C’bury (NZ) club in 1993. After securing a place on the 1993-94 Kiwi tour of England and France, Pongia added much-needed muscle to the Canberra pack in the Raiders' grand final win over C’bury in 1994.

In 1998 he would sign and play for the Warriors in what was reported as a trade for Ruben Wiki during the Warriors and Raiders out of court settlement for Ruben. Pongia would also captain the Kiwis that year in the Third Test of the Trans-Tasman series but the move was short-lived and he returned to Australia to play for Easts in 1999. Named NZ captain for the ANZAC Test that year he withdrew from the fixture after being injured in a club match. Injury also saw Pongia miss out on the Tri Nations competition in 1999 and, after returning from a seven match suspension in early 2000, a torn muscle injury saw him miss the remainder of the domestic season.

After representing NZ in the World Cup Pongia’s club appearances were limited to just three matches in 2001. Released by the Roosters he sought a two-year deal with the London Broncos but the deal fell through and he joined Chaitillon of Paris as captain-coach. After a disastrous start to the season he moved to the south of France with Villeneuve. Pongia was a member of the team that won the French Cup in 2003 and he linked with Wigan in the English Super League where he contested the Challenge Cup final. Pongia played in 35 Tests between 1992 and 2000.