You are using an out of date browser. It may not display this or other websites correctly.
You should upgrade or use an alternative browser.
Overview Gallery (12) 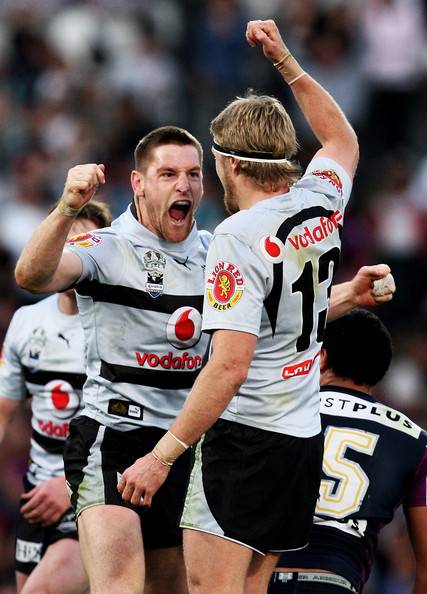 The Magic Moment:
In 2008 the New Zealand Warriors finished in 8th spot for the regular NRL season, their reward for this was a first up Qualifying Final against the defending 2007 NRL Premiers & 2008 Minor Premiers the Melbourne Storm at their fortress like, Olympic Stadium in Melbourne.

(The Storm had in fact claimed the Minor Premiership 3 consecutive times in as many years, 2006-08, but in 2010 the Melbourne Storm franchise had all of their titles honors rescinded, including but not limited to their 2007 & 2009 NRL Premiership Titles, due to being found guilty of major systematic NRL salary cap breaches ranging for a period of around 5 years)

Although the Warriors had a regular season victory over the Storm in 2008, albeit in a tight 8-6 Round 20 affair at the Warriors home ground, Mount Smart Stadium, the New Zealand based franchise were given little hope by most of upsetting the formidable Storm outfit in week 1 of the 2008 NRL Finals Series, even the most ardent of Warriors supporters knew that team would have to be well & truly on top of their game & produce something special to pull off an unlikely victory in Melbourne, where the Storm had forged an almost invincible aura.

The match itself turned out to be a lot closer than many had predicted, with less than 3 minutes to go the Warriors had repelled yet another relentless Storm attack on their own line & were trailing by only a single point 14-15, but although the Warriors received possession of the ball after defusing yet another in goal bomb from Storm halfback Cooper Cronk, they were now faced with having to bring the ball out deep from within their own half from a 20 meter restart.

After all that defence the Warriors seemed to be suffering from fatigue, so much so that former Australian, New South Wales & Parramatta rugby league great turned rugby league television commentator / analyst, Peter Sterling, pronounced ... "There is nothing left in the Warriors at the moment, it is a long way to travel to try & get at least one point".

Prophetic words indeed, because what happened next is as close to a rugby league miracle as it gets.

Immediately after Sterling had made his somewhat premature assessment of proceedings, the Warriors moved the ball to the left of the ruck & with exactly 2 minutes & 20 seconds left on the clock the ball ends up in the hands of the Warriors in motion left center, Jerome Roptati.

Ropati puts on some deft footwork before the line & then produces a great fend on his young, but very highly regarded marker, Israel Folau, which subsequently draws the Storms right winger into make the tackle that had been missed by young Folau, which he does, but not before Ropati pops up a superb offload to his supporting winger, a man known to the entire rugby league world as The Beast, Manu Vatuvei.

Vatuvei charges on to the ball & then produces a left foot step that leaves the covering defender, Cooper Cronk, for dead & then proceeds on a charging 25 meter run, at one stage it seemed like Vatuvei may die with the ball as two covering defenders, including the outstanding Australian, Queensland & Storm fullback, Billy Slater, converge on the big man.

But just as The Beast, who is far more revered for his charging runs & try scoring exploits than his ball playing skills, is felled by the cover defence, he pops up a perfectly timed absolute gem of an offload to the flying Warriors standoff, Micheal Witt, who has pushed up on the inside of Vatuvei as support.

Witt then totally blitzes the Storm cover defence & has enough time to seemingly taunt the Storm by holding the ball up over his head in the in goal area as celebration, before slamming it down for the match winning try, veteran Australian sports & rugby league commentator, Ray Warren, is so astounded by what he is witnessing that he exclaims ... "What's he doing ??? ... Put it down! ... PUT THE BALL DOWN SON!!!", a sentiment no doubt shared by a many a Warriors supporter at the time.

This scintillating play in what was a tremendous game is still celebrated as a magic moment even today, not just for the try and or the unlikely result, but also because with an absolutely gutsy display of will, skill & heart, the Warriors against all odds became the first 8th placed to defeat the 1st placed Minor Premiers in a NRL Finals series since the inception of, the somewhat controversial it has to be said, McIntyre Top Eight System in 1999.

What also makes this Warriors against the odds victory all the more sweeter is, as history now shows us, that the hugely formidable Melbourne Storm team of the time, were playing with more than a few aces hidden up their sleeve, for which they would later pay a heavy price for in 2010.