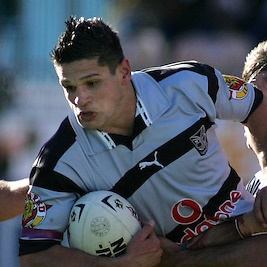 Current Status
Paul Atkins whereabouts are unknown. If you have any information please contact us

Played one solitary game in the NRL against the Roosters. Made the mistake of running the ball straight back to Adrian Morley twice where he got absolutely hammered on both ocassions. To his credit he bounced up both times earning the praise of then coach Tony Kemp. This from an article on the game.

Prop Kane Ferris and outside back Paul Atkins had brief but impressive efforts off the bench.

"I think once again the young kids that stepped up today - Kane Ferris, Cooper Vuna scored a try and the bloke who needs to learn how to side-step [referring to Atkins] were again outstanding," coach Tony Kemp said.

Atkins came on midway through the second spell and was subsequently smashed in two massive tackles from Roosters enforcer Adrian Morley with his first two touches.

The lightweight winger or fullback made the mistake of carting the ball straight up at one of the hardest hitters in the NRL but got straight to his feet on both occasions to his credit.

"Kids come out of the Bartercard Cup and the one thing I know they have in abundance is courage," Kemp said.

"He has got the courage of a lionheart. I knew he has been one of the toughest kids I have been watching for two years so he obviously relished his opportunity but he left his step on the bench."

Despite getting hammered, Atkins' first touches lifted the rest of the Warriors side as they watched a young kid come out into the fray. The intensity on defence immediately picked up and Awen Guttenbeil evened the score with a thumping shot on Roosters prop Ned Catic. The veteran second rower produced one of his best games of the season and flew at Catic before knocking him flat on his back.

As tempers began to flare, referee Steve Lyons penalised him for being offside but the effect of the tackle made its impact.

"He definitely gave the players a lift when he went on,' Kemp said. "They took one look at him - the kid's only 80kgs - and he didn't take a backward step. This is what we are trying to build."