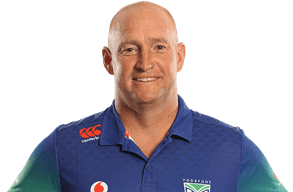 You are using an out of date browser. It may not display this or other websites correctly.
You should upgrade or use an alternative browser.
Overview Gallery Discussion
Nathan Brown

Contracted till end of
2023

Nathan Brown (born 31 July 1973), also known by the nickname of "Brownie", is an Australian professional rugby league football coach, and former player who played in the 1990s and 2000s, and has coached in the 2000s and 2010s. He played as a hooker for the St. George Dragons and St. George Illawarra Dragons in the National Rugby League (NRL), also coaching the latter. He then spent time in the Super League coaching the Huddersfield Giants and St Helens, with whom he won the 2014 Super League Grand Final, before returning to Australia to coach the Newcastle Knights in the NRL.

Brown was appointed coach of the Dragons for the 2003 season, becoming the youngest non-playing coach in years in the NRL at age 29. During his first season, at a match on Sunday, 13 April 2003 against Manly at WIN Stadium, a frustrated Nathan Brown berated captain Trent Barrett, Brett Firman and Lance Thompson on the sideline in the 53rd minute with the scores locked up at 12-all. Brown slapped Barrett across the cheek and grabbed the jerseys of Barrett and Thompson. The incident was seen by the crowd and other players on the big screen and proved a decisive turning point as Manly ran in five second half tries to win 38-12. After the match, Brown was apologetic to Barrett and was later fined $5,000 by the NRL.

On 19 July 2005, Brown was fined $10,000 by the NRL after claiming that referees are biased against St George Illawarra. Brown made the comments after his team were penalised 9-3 by the referees in St George Illawarra’s 10-36 defeat by Manly-Warringah.

After finishing second in the 2005 competition, Brown's team lost the preliminary final to the eventual premiers, Wests Tigers. Following many injuries and team losses throughout the 2007 season, he was under pressure to keep his job heading into the 2008 season.

On 1 April 2008, it was announced that Brown would not coach the Dragons in the 2009 season, which ended an association with the club that stretches back to the start of the joint venture. He was replaced by Wayne Bennett on 18 July 2008 it was announced that Brown had signed a 3-year deal with Super League club, Huddersfield, the same club Tigers superstar Brett Hodgson joined.

In his first season at Huddersfield he took the team to the 2009 Challenge Cup final.

He left Huddersfield at the end of the 2012 season to take control of St Helens. In his first season as coach, Brown guided St Helens to 5th place in Super League. However, they were defeated 11-10 by Leeds Rhinos in the play-offs stage of the competition.

In his second season, Brown guided St Helens to 1st place in Super League and victory in the Grand Final, after defeating the Wigan Warriors 14-6 at Old Trafford.

Brown's side playing against a 12-man team for 78 minutes, after Warriors prop Ben Flower was sent off for punching Lance Hohaia in the second minute of the match.[15] In October 2014, it was announced that Brown would leave the club to return to his native Australia, citing 'family reasons'.

In February 2015, the Melbourne Storm announced that Brown had joined the club as a "coaching consultant". Based in Sydney, Brown worked on scouting assignments and provided specialist coaching for the club's hookers. On 9 September 2015, Brown signed a 3-year contract to coach the Newcastle Knights.

The 2016 NRL season was Brown's first as head coach of the Newcastle Knights. In his first two seasons at Newcastle, Brown's side collected back to back wooden spoons, finishing last on the ladder. In 2018, after Newcastle defeated Brisbane, Brown claimed at the press conference that Brisbane coach Wayne Bennett was to blame for Newcastle's problems over the last few seasons. He went on to say “I just don’t think he needs to behave like that myself but the reality is when Wayne came to town if he thought with his big head rather than his little head, I wouldn’t have had to rebuild the joint,’’. Brown went on to apologize for his remarks a few days later.

In June 2018, Brown signed an open ended performance based contract with the Knights with no set term but a payout agreement should the contract end.

In the 2019 season, the Knights won their first game, lost their next 5, then won 5, before going back on a 5-game losing streak. This prompted discussions between Brown and club CEO Phillip Gardner, resulting in a mutual agreement that Brown would not coach the Knights in 2020, but would stay on until the end of the season. However, on 27 August, the Knights announced that Brown would depart the club effective immediately.

In November 2020 it was announced that Nathan Brown had signed on as NZ Warriors coach for 3 years.
Share:
Share