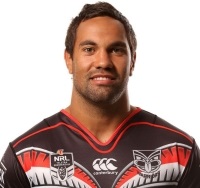 In Round 1 of the 2014 season, Allwood made his NRL debut for the Raiders against the North Queensland Cowboys at centrein the Raiders 28-22 loss at 1300SMILES Stadium. Allwood finished his debut year in the NRL with him playing in 11 matches and scoring 1 try for the Canberra Raiders. Due to an off-field incident, Allwood was released before the season ended.

On 20 May 2014 it was announced that Allwood had signed a 3-year contract with the New Zealand Warriors starting in 2015.

Just a week after being appointed head coach last May, Andrew McFadden showed how highly he rated Allwood by making him his first signing. Matt made 11 first-grade appearances in his debut season last year. The speedy outside back represented the Warriors for the first time at the 2015 NRL Nines.