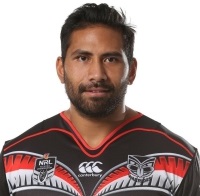 Poching attended Aorere College and played for the Mangere East Hawks in the Auckland Rugby League competition. He also played for the Counties Manukau Jetz in the Bartercard Cup.

As a 19 year old he played in the NSWRL Premier League for the Auckland Lions in twenty matches before joining the Junior Warriors in 2008 with the creation of the Toyota Cup. He played in 24 of the teams 27 games and scored one try. This led to him being resigned for the 2009 and 2010 seasons.

He joined the New Zealand Warriors senior side in 2009 but his season was hampered with injury. He made his first grade debut on the 15 May 2010, against the North Queensland Cowboys.

In 2011 he was named the Auckland Vulcans Player of the Year. He played in the French Elite One Championship for AS Carcassonne in 2012.

He played for the Counties Manukau Scorpions in the 2013 National Competition and in 2014 played in the NSW Cup for the New Zealand Warriors.