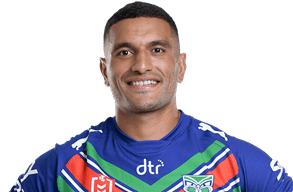 You are using an out of date browser. It may not display this or other websites correctly.
You should upgrade or use an alternative browser.
Overview Gallery Discussion
Marcelo Montoya

Warriors Debut (Date and Match Details)
Round 4, 2021 vs Sydney Roosters

Montoya was born in Lautoka, Fiji to a Chilean father and Fijian mother, and moved to Campbelltown, New South Wales, Australia at the age of three.

He played his junior rugby league for the Bankstown Bulls, and attended Patrician Brothers' College, Blacktown.

Montoya was signed by the Canterbury-Bankstown Bulldogs and played in their Harold Matthews Cup team. He progressed through the Bulldogs' youth system, and played in their NYC team between 2014 and 2016, scoring 36 tries in 46 matches. The captain of the NYC team in 2016, he also played seven games in the Bulldogs' New South Wales Cup team that year, scoring six tries. Montoya's great form in the Holden Cup saw him promoted into the Bulldogs first grade NRL squad where he was on standby for the first grade team for the last few weeks of the season. On 8 October 2016, Montoya made his international debut for Fiji in an international against Samoa in Apia, playing on the wing and scoring a try in Fiji's 20–18 win.

In February 2017, Montoya was named in the Bulldogs 2017 NRL Auckland Nines squad. In round 3 of the 2017 NRL season, Montoya made his NRL debut for the Bulldogs against the New Zealand Warriors where he played on the wing and scored a try in the 24-12 win at Forsyth Barr Stadium in Dunedin, New Zealand.[ He is the first player of Chilean and South American descent to play in the NRL. He scored his first career double against the Newcastle Knights on the 7th of April 2017 in a 22 points to 12 win.

On 6 June, Montoya re-signed with the Canterbury-Bankstown Bulldogs for a further three seasons until the end of 2020.

After a successful opening season in Montoya's career, the Canterbury-Bankstown Bulldogs named him the NRL Rookie of the year.

In 2018, Montoya made 15 appearances for Canterbury and scored 2 tries. In September 2018, Montoya and other Canterbury players celebrated Mad Monday at The Harbour View Hotel in Sydney's CBD. Later in the night, photographs provided by the media showed Canterbury players heavily intoxicated, stripping naked and vomiting in the street. Montoya was pictured on the street asleep by photographers after vomiting earlier. Montoya was handed a fine of $10,000 ($5000 suspended) by the club for his involvement.

Montoya played the first 2 games of the 2019 season at centre as Canterbury suffered back to back heavy defeats against the New Zealand Warriors and the Parramatta Eels. Montoya was subsequently one of five players demoted to reserve grade by coach Dean Pay.

After spending 7 weeks in reserve grade, Montoya was recalled to the Canterbury side for their Round 9 match against the Newcastle Knights which Canterbury lost 22-10 at Suncorp Stadium.

In Round 18 against Brisbane, Montoya was taken from the field during the club's 28-6 loss with an apparent leg injury. Scans later revealed that Montoya would be ruled out for the rest of the season after it was shown he had tears to his posterior cruciate ligament, lateral ligament and medial meniscal ligament.

Montoya made his return for Canterbury in round 8 of the 2020 NRL season, scoring a try in a 26-10 loss against Souths. In round 10 against St. George and with the scores locked at 22-22, Canterbury spread the ball left and a routine pass was thrown to Montoya who in turn dropped the ball. Saints player Corey Norman picked up the loose ball and raced away to score the match winning try on the full-time siren.

On 22 September, it was revealed that Montoya would be released by Canterbury at the end of the 2020 NRL season. Montoya was one of eight players who were released as the club looked to rebuild for the 2021 season.

On 11 November it was announced that Montoya had signed for 2 years with the New Zealand Warriors.
Share:
Share