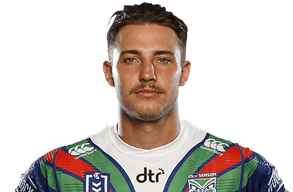 Karl Lawton (born 29 November 1995) is an Australian professional rugby league footballer who currently plays for the New Zealand Warriors in the National Rugby League. He plays at halfback, five-eighth, hooker and centre

Born in Murwillumbah, New South Wales, Lawton played his junior rugby league for the Burleigh Bears, before being signed by the Gold Coast Titans.

In 2016, Lawton graduated to the Titans' Queensland Cup team, Tweed Heads Seagulls. In Round 17 of the 2016 NRL season, he made his NRL debut for the Titans against the New Zealand Warriors. Joining his brother Kayne Lawton as a first-grade player, they became the first set of brothers to play for the Titans at NRL level. His debut was cut short however, as he suffered a severe leg injury seven minutes into the second half.

Playing 11 games for the club in 2017, Lawton geared up for one of his better years of Rugby League, scoring his first career try in the Gold Coast Titans Round 2 loss to the Newcastle Knights at McDonald Jones Stadium Newcastle and his second a month later in his sides other loss to the Canberra Raiders at home. Lawton finished his 2017 campaign with 2 tries to his name and 11 first grade games for the club.

On March 1 2018 Lawton was released effective-immediately from the final year of his contract with the Gold Coast Titans to take up a two-year deal with the New Zealand Warriors exactly a week before the 2018 Telstra Premiership season commenced.
Share:
Share