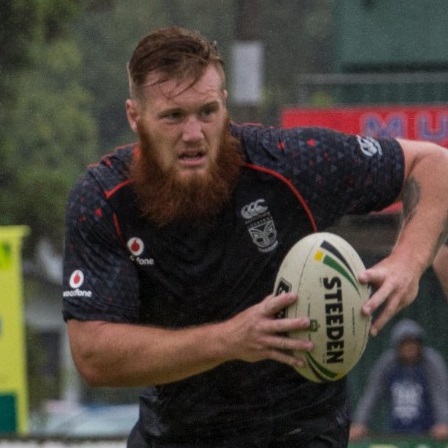 Jordan Pinnock, a former field athletics junior champ, is in the Warriors squad for 2017.

Pinnock was an outstanding South Island Secondary Schools (SISS) Athletics Champ. Competing in the Under 15 grade, representing Greymouth High School, Pinnock let rip with the Discus sending the tape out to a personal best distance of 51.70m to win by 13 metres and break the SISS record. This distance also surpassed the record for the next grade up with the same weight.

Fresh from the 100m final he went onto Shot Put where he also broke the SISS record with a distance of 14.87m and to win by over 3 metres. Pinnock made the finals in both the 100m and 200m, placing 5th and 6th respectively, recording a personal best in the 200m with a time of 24.46s.

Pinnock, the outstanding athlete of the year for Greymouth in 2012, collected nine trophies including the Eder Cup for his series of West Coast and club records in the shot put and discus throughout the season.

He also collected the Charteris Cup as the best all-round athlete in the track and field, along with the S McDonnell Cup for the most promising athlete. Other trophies to grace Pinnock’s mantelpiece are the Loft Cup, Gavin Sullivan Trophy, Andy Grogan Cup, Trevor Sweeney Cup, and Jim Oakley Cup.

After playing league for the NZ U15 Merit team and South Island U17s in 2012 and NZ U16 2012/2013 Pinnock was signed to the Holden Cup 20s competition with the St George Illawarra Dragons.

In 2015 Pinnock signed with the Newcastle Knights after playing games for the Dragons in their Illawarra Steelers SG Ball team.