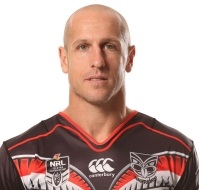 Robson made his NRL debut for the Manly Sea Eagles in 2004 against Cronulla Sharks. After only making 6 appearances in 4 years with Manly, Robson signed for Parramatta Eels at the start of 2009. He played 61 games over 3 years for the Eels.

Robson joined the New Zealand Warriors for the 2016 season on a one year deal.