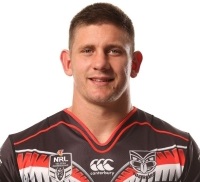 Lillyman attended Columba Catholic College, Charters Towers, where he was a boarding student for a while. His youth club was the Richmond Tigers in Northwest Queensland.

Jacob Lillyman arrived at the Vodafone Warriors in 2009 after six seasons and 62 matches for the Cowboys as well as having State of Origin experience under his belt. He was able to link up with former North Queensland team-mate Micheal Luck as well as Queensland Origin colleagues Steve Price and Brent Tate. By the end of his first season in Auckland, he had essentially been converted into a front rower from the second row by Ivan Cleary.

Lillyman’s second campaign was hampered by a foot injury, which limited him to just 12 appearances. On the back of a solid offseason, Lillyman had an impressive 2011 campaign, helping the Vodafone Warriors back into the finals and earning a recall to the Queensland side. Jacobbecame the 22nd player to reach the 100 games milestone for the Vodafone Warriors, achieving the mark in the final round of the 2013 campaign.

Also known as ‘Bull’ for his brute strength, he is noted for his strength in the gym, particularly in the bench press, for which he reportedly can lift over 180kg.

Valued for his consistency and durability, Lillyman played 22 out of 24 games in 2013, all 24 in 2014 and 21 of 24 matches in 2015. He lifted his career tally beyond 200 appearances in 2015; entering his eighth season with the club in 2016, Lillyman is just five games short of becoming only the second Australian player to appear in 150 matches for the Vodafone Warriors. He played all three games for the Queensland Maroons in their 2-1 State of Origin series triump over New South Wales.

On November 6, Jacob became a father for the first time when his partner Tui-kay gave birth to daughter Arani.