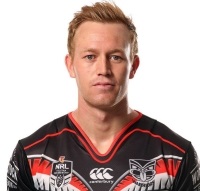 Henare Wells was born in Taumarunui, but moved to Sydney at a young age, came through the Roosters system and was the player next to Roger Tuivasa-Sheck in the 2013 NRL media guide on the club's Toyota Cup page.

Wells wasn't able to make it into the first grade side at the Roosters and despite scoring some spectacular tries for their then reserve grade feeder team, the Newtown Jets.

Wells was released at the end of that season and moved to Queensland Cup side, the Bears.

Last year he scored six tries in a game for the Bears against Sunshine Coast and went through a patch of scoring 13 tries in four games. But this year he picked up a knee injury, which restricted his game time this year.

Wells was signed with the Warriors for the 2016 season.