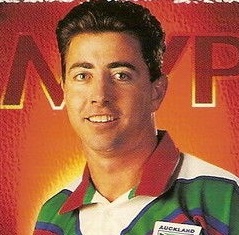 Penrith's first ‘home-grown’ Test player, Greg Alexander displayed a unique ability during his career to score and set up tries. Fast, with an elusive step and swerve, 'Brandy' Alexander was also a great tactical kicker, a confident goal-kicker and an excellent cover-defender. A star schoolboy footballer, Alexander made a stunning impact with the Panthers in 1984. He was duly named ‘Dally M’ Rookie of the Year, and in 1985, ‘Dally M’ Player of the Year (the year he broke Bob Landers' long-standing club point-scoring record).

In 1986 Alexander was a late call-up to the 1986 Kangaroos squad after Parramatta winger Eric Grothe was ruled out and played in 10 matches on tour (no Tests).

1987 was an injury-plagued season for Alexander (including a highly publicised gouging injury) but he returned to win selection in the President's XIII side against Great Britain in 1988.

Alexander earned the top halfback position on the 1989 tour of NZ but was replaced in the Second Test by Manly's Des Hasler at the preference of coach Bob Fulton.

Alexander played one of his finest matches in Penrith’s 30-18 major semi-final win over Canberra to propel the club into the 1990 grand final. Although losing to the Raiders, 18-14, he duly made his second Kangaroo tour – taking the field as replacement in the Third Test against Great Britain before being selected on the wing in the two Tests against France. In the match against the ‘French B’ side at Lyon he scored a then world record 46pts (5t, 13g) for an international match and rounded off a try in the Second Test with a memorable backflip.

As Penrith captain in 1991 he led the club to an historic 19-12 win over Canberra in the grand final. Alexander controlled the match with a finely-tuned kicking game in the second half; potting a 38m field goal to snatch a 13-12 lead before landing a majestic side-line conversion of Royce Simmons' try to wrap up the match. Although ruled out of the Australian Tour of Papua New Guinea with injury he went to England and unsuccessfully led Penrith in the World Club Challenge against Wigan.

The 1992 season saw a downturn in his career following a troublesome knee injury and the death of his younger brother Ben in a car accident.

At the beginning of the 1993 season he was replaced as captain by John Cartwright and was shifted to fullback following the signing of Kiwi halfback Gary Freeman. Alexander's desire was sadly missing with the Panthers and he signed on with the Auckland Warriors for the 1995 season.

After two seasons across the Tasman, Alexander returned to Penrith to see out the final years of his career.

In 1997 his brilliant form earned him a NSW halfback’s jersey in the Super League Tri-Series but a foot injury saw him miss the remainder of the season.

While his final three seasons with the Panthers were injury-ridden Alexander retired in 1999 as only the second player in history (after Terry Lamb) to score 100 tries and 1000 pts for the one club.