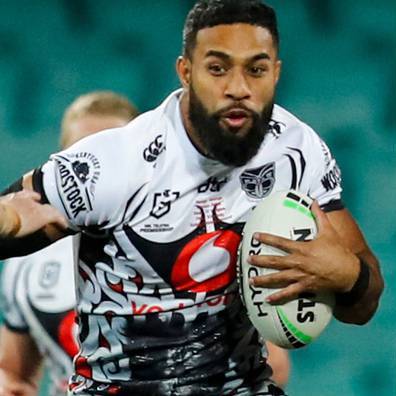 Warriors Debut (Date and Match Details)
Round 12, 2020 vs Wests Tigers

Jennings was born in Blacktown, New South Wales, Australia to Tongan-born parents. He is also of Fijian and English descent. He is the younger brother of former Eels teammate Michael Jennings and older brother of Penrith Panthers player Robert Jennings, and nephew of 1960s All Black Arthur Jennings.

He played his junior rugby league for the Western City Tigers prior to being signed by the Penrith Panthers.

In October 2011, Jennings played for the Australian Schoolboys.

In 2014, Jennings moved to Penrith's New South Wales Cup team. In February 2014, Jennings played in Penrith's inaugural NRL Auckland Nines squad. He suffered a season ending elbow injury in the tournament. On 30 April 2014, Jennings re-signed with the Penrith outfit on a two-year contract.

In Round 1 of the 2015 NRL season, Jennings made his NRL debut for Penrith against the Canterbury-Bankstown Bulldogs. He scored a try on debut. In September 2016, Jennings signed a one-year contract with the Parramatta Eels starting in 2017, after not receiving any game time in the 2016 NRL season.

On 2 April 2018, Jennings made his debut for Parramatta in their 30–20 defeat by the Wests Tigers. On 28 August 2018, Jennings won the Jack Gibson NRL Coaches Award after being voted the club's best back. On 30 October 2018, Jennings signed a one-year contract extension to remain at Parramatta until the end of the 2019 season.

Jennings began the 2019 NRL season in reserve grade as coach Brad Arthur chose both Blake Ferguson and Maika Sivo as the club's first choice wingers. In Round 10, Jennings was called into the Parramatta side to cover for the suspended Sivo as the club travelled to Townsville to face North Queensland. With the scores locked at 10–10, Jennings attempted a pass across his own goal line to Ferguson on the first tackle. Ferguson lost the ball and North Queensland crossed over for the match winning try. The following week, Jennings kept his spot on the wing as Parramatta lost to last placed Penrith 16–10. Jennings was then subsequently demoted to reserve grade by Arthur. After being demoted, Jennings made no further appearances for Parramatta in the 2019 NRL season. Jennings instead played for the club's feeder side the Wentworthville Magpies in the Canterbury Cup NSW competition. Jennings scored a try in Wentworthville's 2019 grand final defeat against Newtown at the Western Sydney Stadium.

In round 10 of the 2020 NRL season, Jennings was called into the Parramatta side as a replacement for the injured Blake Ferguson. In his first touch of the ball, Jennings knocked on which lead to a Manly try. In the final play of the game, Jennings scored a try but it was not enough as Parramatta lost the match 22–18 at Brookvale Oval.

Midway through the 2020 NRL season, Jennings was loaned out to the New Zealand Warriors side. He made his debut for the club in their round 12 victory over the Wests Tigers at the Sydney Cricket Ground. At the end of the 2020 regular season, Parramatta finished in third place and qualified for the finals. Jennings was a late inclusion for Parramatta in their elimination final match against South Sydney. Jennings scored two tries as Parramatta lost 38–24 at Bankwest Stadium.

Jennings played a total of 18 games for Melbourne in the 2021 NRL season as the club won 19 matches in a row and claimed the Minor Premiership. Jennings played in two finals matches including the preliminary final where Melbourne suffered a shock 10-6 loss against eventual premiers Penrith.

In round 1 of the 2022 NRL season, Jennings was taken from the field during the clubs match against the Wests Tigers. It was later announced that Jennings would be ruled out for the remainder of the season after suffering an ACL injury.
Share:
Share