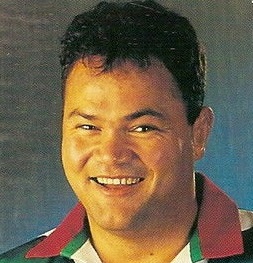 Goal-kicking Auckland forward, a former rugby union player with the NZ Maori team, gave good service to the Bulldogs for two seasons before signing with the Auckland Warriors.

Hill made his Test debut with the Kiwis in the one-off match against Papua New Guinea in 1992 but was sensationally ruled out of the First Test of the 1993 Trans Tasman series when he was suspended for two games for an alleged high tackle. He played in the next two Tests before taking part in the Kiwi tour of England and France.

Hill played for Featherstone Rovers in 1993-94 while he waited for the Warriors’ debut season but his 5 Test career was over and his two seasons with the club were relatively unproductive only playing 14 games.

After his stint with the Warriors he went back to Rugby Union in New Zealand as well as England and Ireland.

Would also coach Union later on.