You are using an out of date browser. It may not display this or other websites correctly.
You should upgrade or use an alternative browser.
Overview Gallery (1) 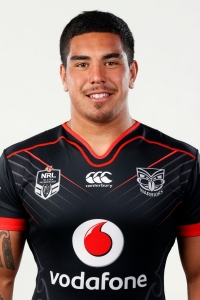 The former Manurewa High School student Erin commanded interest from a number of clubs before signing with the Vodafone Warriors. He captained the New Zealand Secondary Schools against New South Wales Combined Schools and was also selected in the New Zealand Residents 18s for a two-match series against Taurahere 18s (a comprising Australian-based, New Zealand-eligible players). The halfback led Manurewa High School to semi-final finishes in both the NZRL New Zealand Secondary Schools Nationals and Auckland’s College Rugby League First XIII competition. He was named the Vodafone Warriors Player of the Tournament at the New Zealand Secondary Schools Nationals prize giving and captained Point Chevalier's Under-20 side in the Auckland club competition. He was won the major rugby league accolade at the 2014 ASB Young Sportsperson of the Year Awards. Erin, who turned 17 last September, has joined the Vodafone Warriors’ NYC squad on a three-year contract. His mother is Silver Ferns netball great Temepara Bailey (nee George).

While he was an NYC rookie he was the only player in the Vodafone Junior Warriors’ squad to appear in all 27 matches last year.
Share:
Facebook WhatsApp Email Share Link