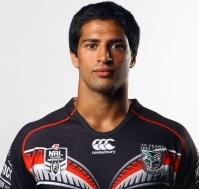 After playing his junior football with the Northcote Tigers, David was brought into the Vodafone Warriors' development programme. On the back of an impressive showing in the 2012 trials he won a place in the club's NYC squad, making his debut for the Vodafone Junior Warriors in the first round. He went on to have an exceptional year, making 24 appearances and finishing as the NYC's top tackler with 957 tackles. Bhana was a finalist in each of the club’s main NYC awards, winning the TNT Young NYC Player of the Year accolade. Named 2013 team captain, Bhana had another exceptional year as he led the squad all the way to the NYC grand final only to fall short to Penrith. His work ethic and tenacity as a back rower gained the attention of the Vodafone Warriors’ NRL coaches and he was elevated to a fulltime NRL contract for the 2014 season. David is another player who excels in the classroom as well as on the field. After graduating from Birkenhead College as head boy, he went on to study environmental science at the University of Auckland, completing his degree in 201