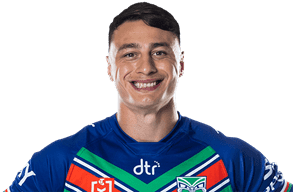 Nicoll-Klokstad has scored 16 tries in 37 appearances for the Storm's under-20 side over the past two years and was named Melbourne's under-20 back of the year and also received the Greg Brentnall Young Achievers' Award.

The Auckland-born player can play in the halves, centres and fullback, as well as on the wing.

Nicoll-Klokstad started playing rugby league with Mount Albert, Richmond and the City Newton Dragons where one of his team-mates was 2015 Junior Warriors captain Toafofoa Sipley. The pair will now be team-mates in the Warriors' NRL squad.

His surname provides an interesting back story, with his mother of Cook Islands-Norwegian extraction, while his father is Maori.

Made a try-scoring test debut for the Cook Islands in the 2017 Rugby League World Cup qualifier against Tonga in October 2015.