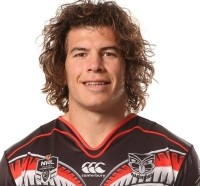 Gubb is another Vodafone Warrior who cut his teeth on rugby union before switching codes. A Wellington College graduate, Charlie played in the schools’ First XV but switched to rugby league in 2008 and made his start in the Wellington club circuit with University Hunters. He was scouted by the Sea Eagles and Tigers but chose to keep his talents on this side of the Tasman, turning down their offers and instead signing with the Vodafone Warriors’ NYC squad in 2010. Gubb featured in 23 matches for the side and came off the bench in the grand final to help the team to its first premiership over South Sydney.

He relocated to Queensland following the 2010 season, after joining the Wynnum Manly Seagulls in the Queensland Cup. Gubb was once again part of a title-winning side, as he played in their 2011 and 2012 grand final victories.

He was lured back to Auckland in 2013 when he was offered a pre-season contract. Hard work saw this extend into a fulltime contract and Charlie performed well in NSW Cup play, eventually earning his first NRL start against South Sydney in Perth in July.

In 2015 he was again a New South Wales Cup regular at the start of the season but earned more NRL exposure midway through the season. The effect of his energy and enthusiasm wasn't lost on his team-mates who named him the players' player of the day for his whole-hearted effort from the bench in the 30-8 home victory against Canberra on June 27. He played nine NRL matches during the season to take his career tally to 15 while he also appeared 10 times at NSW Cup level.