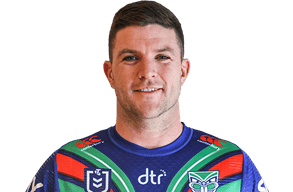 Chad Townsend, a Sydney native, honed his craft in the Cronulla-Sutherland junior league circuit and in 2011 he got the call-up for his hometown Sharks, fulfilling a childhood dream. He made his first-grade debut against the Broncos in June 2011 but he was not able to sustain regular appearances with Todd Carney being ahead of him in the depth chart. He made 19 NRL appearances in his three seasons with the club, notching-up 68 points in total. In NSW Cup and NYC play, however, Townsend was given the chance to truly show his worth. He starred for the Sharks in the NYC with 332 points in 55 games and also for the Cronulla-Sutherland side in the NSW Cup. He led the reserve grade side to a premiership in 2013 and was named at halfback in the NSW Cup Team of the Year.

Signing with the Vodafone Warriors in late 2013 presented an opportunity for Townsend to translate his junior-level and reserve-grade success into the big-time.

Spent 2014 as five-eighth on and off. At times being dropped in favour of Thomas Leuluai.