You are using an out of date browser. It may not display this or other websites correctly.
You should upgrade or use an alternative browser.
Overview Gallery (4) 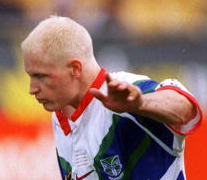 A Glenora Bears junior, in 1999 he shot to prominence when he was called up from the local Auckland scene by the Auckland Warriors. He played five games for the club in the National Rugby League during the 1999 season. He was one of several options trialled by the Warriors as they searched for a replacement for the injured Matthew Ridge. However, despite being one of the more successful replacements, he was not re-signed by the club for the 2000 season and instead joined the Mt Albert Lions in the new Bartercard Cup competition.