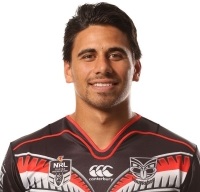 You are using an out of date browser. It may not display this or other websites correctly.
You should upgrade or use an alternative browser.
Overview Twitter Gallery Discussion

An outstanding debut season as a 17-year-old culminated in Ben being named the club’s 2009 Young NYC Player of the Year. He scored eight tries in his 19 appearances, going on to establish himself as captain in 2010. He led the side to the grand final – which the Junior Warriors won – but sadly he was ruled out of the title decider with injury. He brought up his 50th career appearance early in the 2011 campaign, going on to play 64 games in all making him one of the most experienced players in the NYC's history.

After captaining the side to their second straight premiership, Henry was a natural choice to make the jump to the NRL squad. The former Kelston Boys’ High School student shone in his first season in the big-time and was recognised by the NZRL as the Kiwi Rookie of the Year. The 2013 season was trying for Henry on the field as his campaign came to a grinding halt with a season-ending knee injury after seven games. Off the field, Henry won acclaim and was named in the NRL Academic Team of the Year after earning a Certificate in Business Management.

Returning from knee surgery in 2013, ‘Benry’ feared he had seriously injured the same left knee in his comeback match last year. Fortunately concerns of a repeat ACL injury were allayed and he was able to make 16 appearances lifting his career tally to 47. His knee was still an issue, though, and he needed more work on it in the offseason before coming through to play in the 2015 NRL Nines.

With good form in the Nines and the trials, Henry was set for a huge season but, a week after making his 50th appearance, wretched luck struck again in the opening minutes of the fourth-round clash against Brisbane when he was taken from the field with another serious knee injury. Worst fears of another season-ending ACL injury - to the same left knee - were subsequently confirmed with Henry facing more surgery and a long recovery programme.