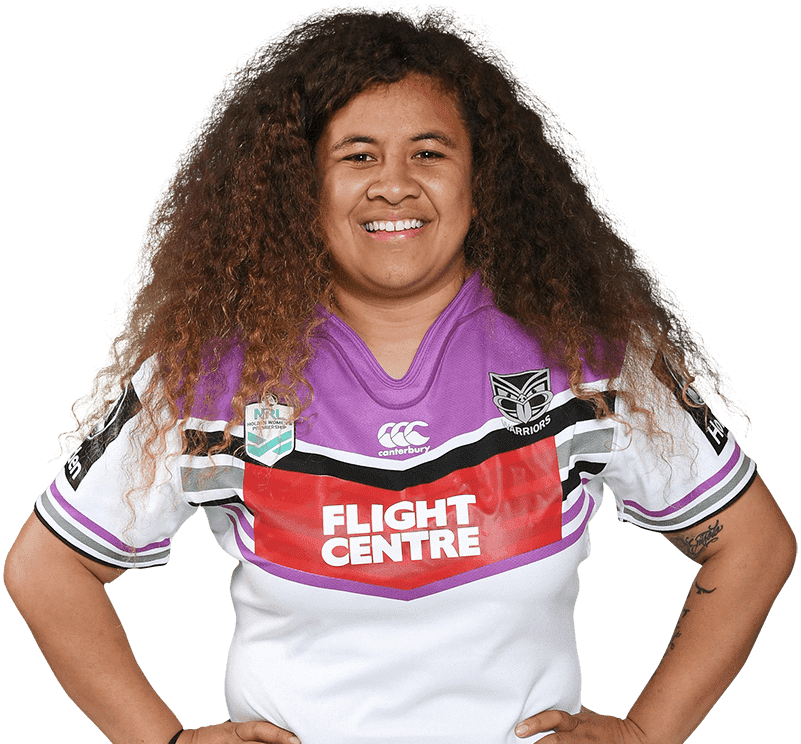 At 22, 'Alison' is one of the youngest players in the Warriors' inaugural NRL women's premiership side. Stands out on the field with her long, curly locks and her aggressive, confrontational approach to the game.
A teacher aide at Waikowhai Intermediate School in Auckland, Alice was named the Auckland Rugby League's 2018 women's player of the year for her deeds with the Richmond Roses (beaten in the grand final) in the local club competition. She also impressed for the Akarana Falcons at the women's national tournament, earning a Warriors contract for the NRLW. One of the few players in the squad yet to play for the Kiwi Ferns.

She is one of New Zealand's rising players and Alice Vailea's debut performance for the Warriors has given her the self-confidence to believe in that statement.

Vailea and her long curly locks featured strongly in the big hits that came out of the Warriors' win over the Roosters in the opening round of the Holden Women's Premiership clash, and she'll be keen to repeat those efforts in her side's clash against St George Illawarra on Saturday.

The 22-year-old carried the ball for 81 metres, made four tackle busts and was a part of some bone-rattling tackles to set the standard of defence for the competition last week.

While she looked like a natural on the paddock, playing at a venue like ANZ Stadium was the first time Vailea had ever experienced an elite setting for a rugby league fixture.

It's the type of enticement set to lure players from across New Zealand and Australia to discover their rugby league dream.

"It's still sinking in, I'm buzzing about the whole experience," Vailea told NRL.com.

"I still don't know how to feel about it, I'm just grateful to be able to be part of history. To open up the competition like that and get a win was really special for everyone back home who has supported us."

Vailea was rated the best women's rugby league player at club level in Auckland this year and is destined for higher honours at the international level with the Kiwi Ferns.

The Richmond Roses junior has been playing rugby league for six years but had never taken it seriously until confirmation the NRLW competition was to become a reality.

She admitted she sat back in the past and watched her teammates succeed, never believing she had what it took to reach a higher level.

"I put my head down and worked hard and find myself here," Vailea said.

"I was in cruise mode about rugby league until I heard the competition was going to happen. It's a great culture to be a part of.

"Our strength as a team is we've got some girls up front that can take on anyone physically and everyone's putting their hand up and backing themselves."

The Warriors weren't tipped to reach the inaugural grand final but another win in Sydney could see them finish in the top two on the competition ladder.

"We never let anything anyone says bother us," Vailea said.

"We're the underdogs. We just roll with that, the men's side seem to have that same treatment. It's humbling for us to know people don't look at us to go far in this competition.

"Luisa has installed that from the start to get that right mindset about not worrying about anyone else and focusing on those within the squad."