You are using an out of date browser. It may not display this or other websites correctly.
You should upgrade or use an alternative browser.
Overview Gallery (30) Discussion (986) 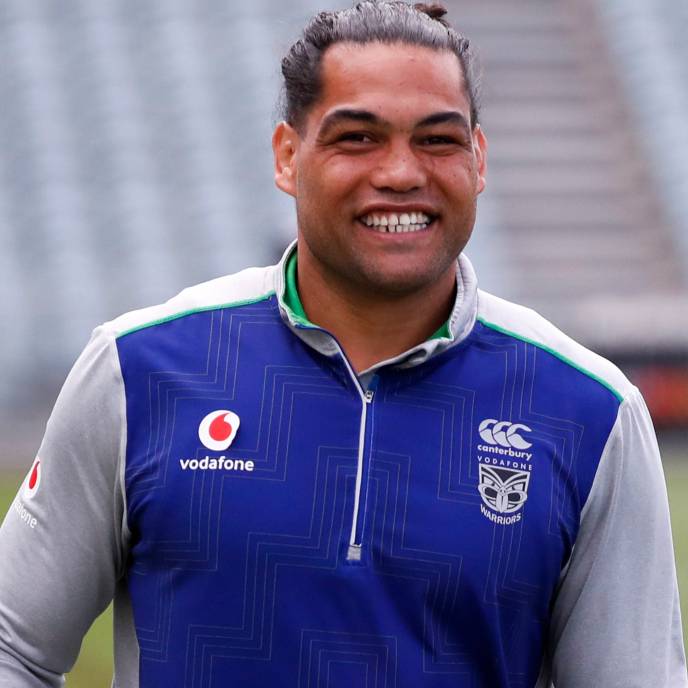 Born in Whangarei, New Zealand, Blair is of Māori descent. Blair played his junior football for the Northland Carvers and attended Whangarei Boys High School before recruited by the Melbourne Storm as a 16 year old where he moved to Brisbane, Queensland and played for their feeder club the Norths Devils with Greg Inglis while attending Wavell State High School. Blair was a Junior Kiwi in 2002 and 2003.

2006
In Round 4, Blair made his NRL debut for the Melbourne Storm against the Wests Tigers where he played of the interchange bench in the Storms’ 30-28 loss at Leichhardt Oval. He played off the bench in the Storm's 15-8 grand final loss to the Brisbane Broncos. Blair was awarded the Rookie of the Year for the club, playing in 16 matches during the season. Awarded with selection in the New Zealand Kiwis 2006 Tri-Nations series squad, Blair made his international debut against Australia, playing off the interchange bench in the 30-18 loss at Mt Smart Stadium on October 14. Blair played in all 4 matches of the tournament including the Kiwis 16-12 Tri-Nations Final loss against Australia.

2007
Blair missed most of the 2007 NRL season due to a foot injury which he suffered in the last year’s Tri-Nations Final, playing in only 8 matches for the Storm.

2008
On 9 May, Blair played for New Zealand in the historical Centenary Test against Australia in a 28-12 loss. In the Storm's preliminary finals match against the Cronulla-Sutherland Sharks, Blair scored his first NRL career try in the 28-0 win at Sydney Football Stadium. On 5 October, Blair played off the bench in the Storm’s 40-0 Grand Final loss to the Manly-Warringah Sea Eagles. He finished the 2008 NRL season with him playing in 27 matches and scoring 1 try.

After the Grand Final, Blair was named in the final 24-man New Zealand squad for the World Cup. In the match against Papua New Guinea, Blair scored his first international try and was named as the Man-of-the-Match in the 48-6 win at Cbus Super Stadium. On 23 November, he started at prop and scored a try as New Zealand defeated Australia 34-20 in the Final at Suncorp Stadium. Blair played in all 6 matches for the Kiwis in the tournament.

2009
On 8 May, Blair played for New Zealand in the 2009 ANZAC Test, where he started at prop in the 38-10 loss. On 4 October, Blair played in the Storm’s 2009 NRL Grand Final match against the Parramatta Eels, where he started at second-row and scored the second try of the match and set up Billy Slater’s try to lead the team to the 23-16 victory. He scored 2 tries in 29 matches in 2009. Blair was also named vice-captain of the Kiwis for the Four Nations and played in all 3 of their matches.

2010
As vice-captain for the Kiwis, Blair was an automatic selection for the NRL All Stars team against the Indigenous All Stars where he started at prop in the 16-12 loss. On 7 May, he played lock for New Zealand in the 2010 ANZAC Test. Blair finished the Storm’s drama-filled 2010 NRL season with 1 try from 22 matches. He was chosen in the 23-man New Zealand Four Nations squad. On 13 November, in New Zealand’s Four Nations Final match against Australia, Blair started at prop as the Kiwis won 16-12 after a try to Nathan Fien with 2 minutes to fulltime. Blair played in 4 matches in the tournament.

2011
In Round 2 against the Gold Coast Titans, Blair played his 100th NRL career match in the Storm’s 40-12 win at AAMI Park. On 6 May, he played for New Zealand in the 2011 ANZAC Test. On 13 July, it was confirmed that Blair signed a 4 year-deal with the Wests Tigers starting from 2012 worth around $500,000 a season. In Round 25 against Manly in the match dubbed as the "Battle of Brookvale" after Blair’s involvement in a fight with Manly forward Glenn Stewart made headlines around the world. The incident started with a fight between Manly's Darcy Lussick and Melbourne's Ryan Hinchcliffe, after Hinchcliffe elbowed Lussick as he tackled him. Other players, including, notably, Stewart and Blair, joined in the melee. But while the drama should have ended with Stewart and Blair being sin-binned, instead it escalated. Stewart, sin-binned first, walked off. Blair, sin-binned second, jogged off. Blair caught up with Stewart and the pair exchanged words - the speculation is Blair suggested the pair to "get it on" and the fists started flying. Then, four other Manly players - including Stewart's brother, Brett - ran in from a distance to get involved. That was the signal for a melee that drew players from everywhere, including the Melbourne bench. Blair and Stewart were later obviously sent off for the rest of the match. The match turned out to be Blair’s last match for the Storm after he was suspended for 5 matches, which made him miss the final series. Blair finished his last year with the Storm with 23 matches and 1 try. Blair was selected in the Kiwis 23-man squad in the 2011 Four Nations series. He played in 2 matches.

2012
In Round 1 of the 2012 NRL season, Blair made his club debut for the Wests Tigers against the Cronulla-Sutherland Sharks, where he started at second-row in the 17-16 win at Leichhardt Oval. In the next match in Round 2 against the Manly, Blair scored his first try for the Tigers in the 22-18 loss at Central Coast Stadium. On 20 April, Blair played for New Zealand in the 2012 ANZAC Test where he started at second-row in the 20-12 loss. He finished his first year with the Wests Tigers with 23 matches. However, with an average of 3 missed tackles a game and low yardage achieved with the ball, Blair was described as one of, "the biggest flops of 2012." Despite the criticism, coach Mick Potter praised his communication and leadership skills during the off-season.

2013
In Round 6 against the St George Illawarra Dragons, Blair played his 150th NRL career match. Blair’s form in the early rounds of the season was a shadow of his former self that he showed at Storm, with the Daily Telegraph writing an article asking, "Is Blair the worst NRL signing ever?" From Round 11 onwards, Blair was moved into the front row, where he stayed for the rest of the season. Blair said, "Everyone knows what I can bring and how I can play. I'm just not doing that enough for the team at the moment and for the people that want to see me do better for the team. Blair finished the year with 24 matches and 1 try.

2014
A "strong start" to 2014 saw Blair starting at lock for New Zealand in the 2014 Anzac Test. Blair was the Wests Tigers' second best performer for hit-ups and tackles made for the season, and played in all of the Tigers 24 matches. He was selected in the Kiwis final 24-man squad for the 2014 Four Nations series. On 15 November, Blair played at prop in the Kiwis 22-18 Four Nations final win over Australia. He played in all 4 matches in the tournament.

On 17 November, Blair was granted a release from his contract from the Wests Tigers and on the next day on 18 November it was announced that he had signed with the Brisbane Broncos on a three-year deal, starting in 2015. Blair later said of Wests Tigers period, "[I'd] be lying if I said I was 100 per cent happy."

2015
In Round 1, Blair made his debut for the Brisbane Broncos against the South Sydney Rabbitohs, starting at prop in the 36-6 loss at Suncorp Stadium. In Round 10 against the North Queensland Cowboys, he played his 200th NRL match in the Broncos 31-20 loss at 1300SMILES Stadium. In Round 18 against the Canterbury-Bankstown Bulldogs, Blair scored his club try for the Broncos in the 16-8 win at ANZ Stadium. On 4 October, in the Broncos Queensland derby 2015 NRL Grand Final match against the North Queensland Cowboys, Blair started at prop in the historic golden point 17-16 loss. Blair played in 23 matches and scored 1 try in his first year with the Brisbane Broncos. He was selected in the 23-man New Zealand squad to tour England, where he was one of four members of Brisbane's grand final team to be included in coach Stephen Kearney's squad. He co-captained the Kiwis in all 3 matches against England, starting at lock in the Kiwis' 2-1 Baskerville Shield series loss.

2016
Blair was named in the Broncos pre-season Nines squad. On 6 May, Blair played for New Zealand in the 2016 ANZAC Test, starting at prop in the 16-0 loss. After he performed a chicken-wing tackle on Broncos teammate Sam Thaiday, he was given a 1 match suspension. Blair was subjected to criticism by former Broncos player Gorden Tallis saying that he was “one of the dirtiest players on the field and he means to do it. I don't know why Wayne Bennett keeps letting it go. I am disappointed he wears the Broncos jersey." Blair later responded saying “I’m man enough to cop what he (Tallis) says and, to be honest, I couldn’t care less. What has hurt me out of all this is the impact it has on my family and my friends. I have a five-year-old son and it’s not a good look when my boy has to go to school and he hears stuff from other kids and parents." Blair finished off the 2016 NRL season with 24 matches. Blair was selected in the New Zealand Four Nations 24-man squad. he played in all 5 matches including starting at prop in the 34-8 Final loss against Australia.

2017
On 5 May, Blair played for New Zealand in the 2017 ANZAC Test off the interchange bench in the 30-12 loss at Canberra Stadium. Blair was named captain of New Zealand for the World Cup due to Jesse Bromwich being stripped of the captaincy after he and Kevin Proctor were caught in possession of cocaine after the test. In Round 11 against one of his former clubs the Wests Tigers, Blair played his 250th NRL match in the 36-0 win at Suncorp Stadium.

Playing as starting prop in every game of the Broncos season, Blair scored one try from his 27 matches. His final game for the club was in the semi-final against Melbourne Storm, where he was again criticised for dirty play. After a late hit on Cooper Cronk, commentator Andrew Johns said, "It’s a coward (act). It’s absolutely dirty play. It’s not needed. He sees the ball go and he’s giving away 30kg to a smaller man and he hits him in the back."

On 4 Oct the NZ Warriors confirmed one of the worst kept secrets in the NRL by announcing the signing of Adam Blair on a 3 year contract.
Share:
Facebook WhatsApp Email Share Link
Join discussion