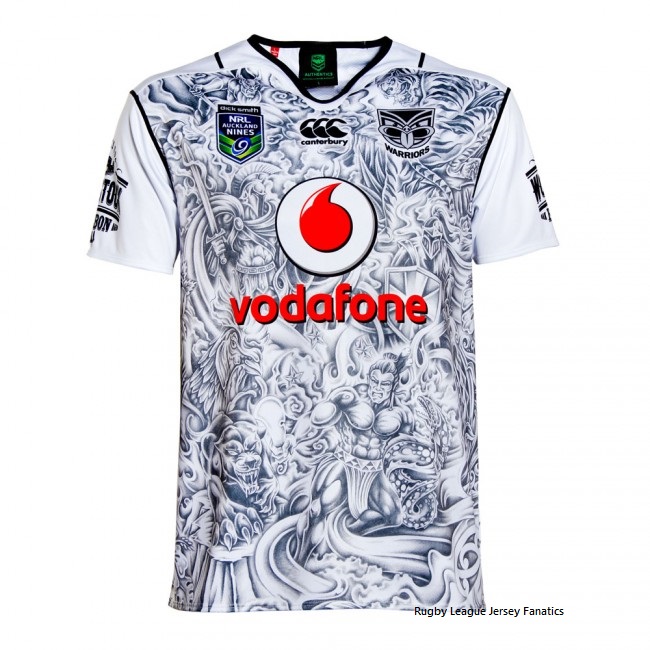 In the tradition of last year’s top-selling ‘Tangaroa’, the Vodafone Warriors and Canterbury of New Zealand have gone to the next level by today unveiling the ground-breaking ‘Spirit of the Warrior’ jersey for the Dick Smith NRL Auckland Nines at Eden Park on February 6-7 next year.

With the extravaganza bringing the NRL’s 16 teams together for the only time in the season, the essence of the occasion has been captured with an evocative jersey featuring not only a Maori warrior but also images representing each of the other 15 competing teams.

Elements of earth, water, air and fire surround the figures and link them together in a surreal battle scene in the tattoo-styled design; artwork inspired by many different cultures also flows through the design and often into the figures themselves.

Countless hours went into the design resulting in a captivating product from the Vodafone Warriors’ official apparel sponsor Canterbury of New Zealand. Last year’s NRL Nines jersey – named ‘Tangaroa’ (the Maori god of the ocean) – was one of best sellers in club’s history.

New signings Roger Tuivasa-Sheck and Issac Luke were the first Vodafone Warriors players to model the jersey at a photo shoot before leaving for England with the Kiwis. They were thrilled with the kit and are both keen to represent the club for the first time at the NRL Nines.

The version of the ‘Spirit of the Warrior’ launched today is a replica of the jersey the Vodafone Warriors will be kitted out in at Eden Park in February.

The jersey features a strong mesh fabric to wick away sweat during tough games; it also has reinforced seams for additional strength. All logos are sublimated into the design for a sleek smooth fit.


CHECK THROUGH THE IMAGE GALLERY OF THIS POST TO VIEW THE DIFFERENT TYPES AVAILABLE​
OFFICIAL REPLICA - Available through the Warriors official online store through presales from the 9th of November 2015.

PLAYERS JERSEY - Same as the official replica but with a players fit taper, GPS pocket and white number on the back.
Share:
Share