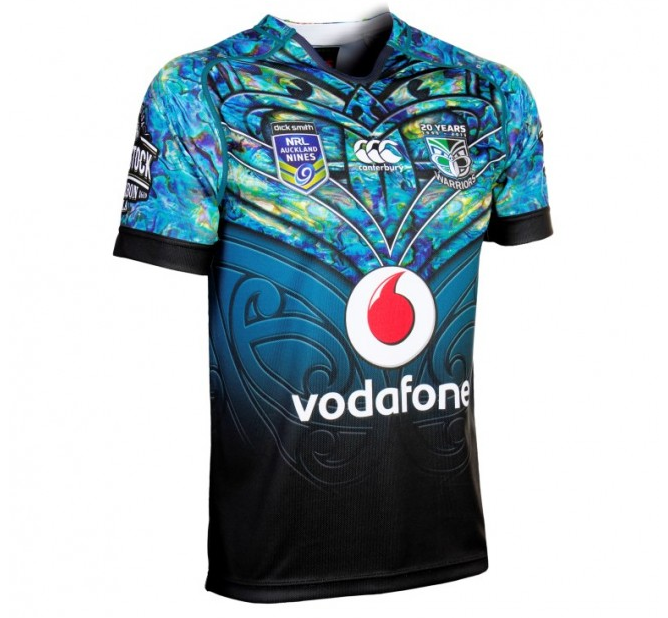 Our 2015 Nines Jersey is named after and pays respect to Tangaroa the Māori God of the Ocean. The paua was chosen to represent Aotearoa (New Zealand) where the different colours signify something unique and vibrant therefore reflecting on the rivalry and spirit of the Nines competition. Paua shell is held in high regard as it is seen as a taonga (treasure) from Tangaroa.

Design features the Warriors Tiki emerging from the chest of the jersey defiant and ready for the challenge that lays ahead. The Mangotipi (white pointer shark) design on the body of the jersey represents movement, speed, and travelling. Sharks also represent strength, determination and power. All of these are attributes of a warrior.

This garment is a replica of what our team will be wearing at the Nines on Saturday 31st January and Sunday 1st February 2015. Made from a strong mesh fabric that is specially designed to wick away sweat during tough games. Features the NRL Nines logo on the right chest and the 20 Years Vodafone Warriors logo on the left chest.


CHECK THROUGH THE IMAGE GALLERY OF THIS POST TO VIEW THE DIFFERENT TYPES AVAILABLE​
OFFICIAL REPLICA - Available through the Warriors official online store. Two shipments were ordered. The first one sold out in days. The second shipment pulled stock out of the Australian quota to meet New Zealand demand but even they sold out online (except for size 3XL) and most retail stores.

*white numbers were made available on jerseys mid season which were the same as the players numbers.

GPS pockets differ from the previous versions. They sit lower on the back and are made of a different material.

These jerseys were used as training jerseys by the team who could no longer play in the old jerseys because of the change of sleeve sponsor. Because of the selling of numbers you have to be careful when buying a jersey thats meant to be player issue or match worn. There will be none that arent looking a little rough as the team would have trained in them repeatedly. Other key indicator is the GPS pocket...
Share:
Share