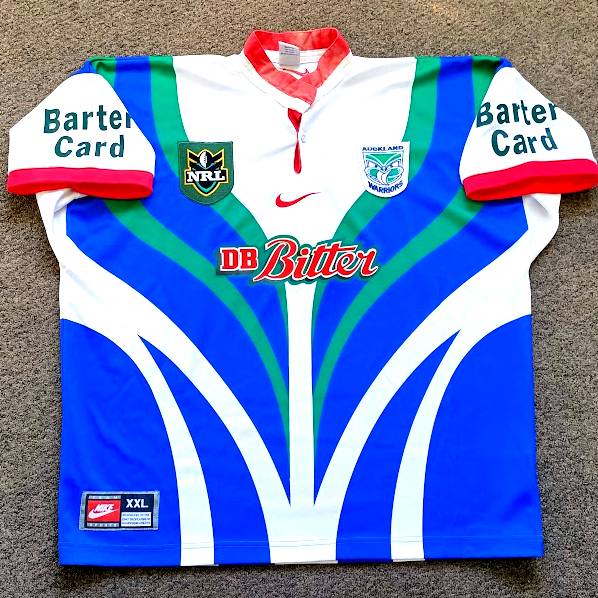 With the Super League coming to an expensive end, Australasian teams would once again be reunited under the one organisiation. This time it would be under the newly formed NRL. The same design would be used as the previous year with the new NRL badge and new sleeve sponsor Barter Card.

As in the year before there would be no difference between home or away games except for the shorts. Blue was home and red was away although there were games when the Warriors would wear their red shorts and socks at home when it contrasted better with the oppositions uniform such as in Round 11 against the Raiders.


CHECK THROUGH THE IMAGE GALLERY OF THIS POST TO VIEW THE DIFFERENT TYPES AVAILABLE​
OFFICIAL REPLICA - Essentially the Super League jersey from the previous season but the Super League badge removed, Warriors and NRL badge and new sleeve sponsor Barter Card added.

These jerseys do pop up from time to time but arent anywhere as common as the 1997 jersey.

PLAYERS JERSEY - Exact same jersey as the replica with the exception of the blue box on the back that was done to make the number stand out more.

Fairly rare and not one you will find in a hurry but they are out there. Some will be missing the NRL badge, number or sleeve sponsor but as long as it has the blue square you can be certain its a player issued jersey at the very least. ..