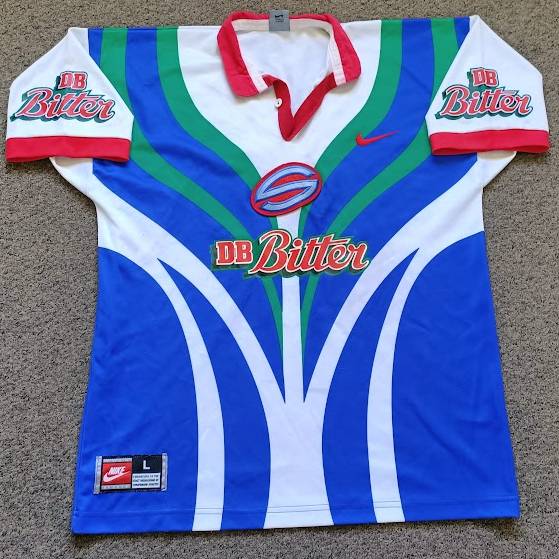 Warriors would disband from the ARL and join the News Limited run Super League competition. Super League saw the introduction of a generic design by Nike that would only differ in club colours. There was only one jersey for both home and away fixtures with the only difference being the colour of the shorts and socks. Blue for home and red away.


CHECK THROUGH THE IMAGE GALLERY OF THIS POST TO VIEW THE DIFFERENT TYPES AVAILABLE​
OFFICIAL REPLICA - Nike would have sole rights to jerseys and would be the only suppliers. There were 2 versions sold to the public. One simply had the Super League badge on it while the other had the teams sponsors laminated on as well.

The basic jersey was sold for $119.95. This jersey is the one thats most commonly available. Most dont command the best price these days and can go for as little as $30.

The other jersey which was sold as a players jersey cost $199 back in 97. Quite expensive and its because of this reason you dont see very many around, especially in good condition.

PLAYERS JERSEY - Same as the expensive replica jersey but with the Telstra Cup badge on the right breast.

Also had a number and players surname on the back. All players were issued a number and regardless of what position they played they would wear that number like how basketball players have the one number. European Super League still uses this system.

Below is a list of the Warriors 1997 player numbers.

These jerseys are rare but do come up form time to time.