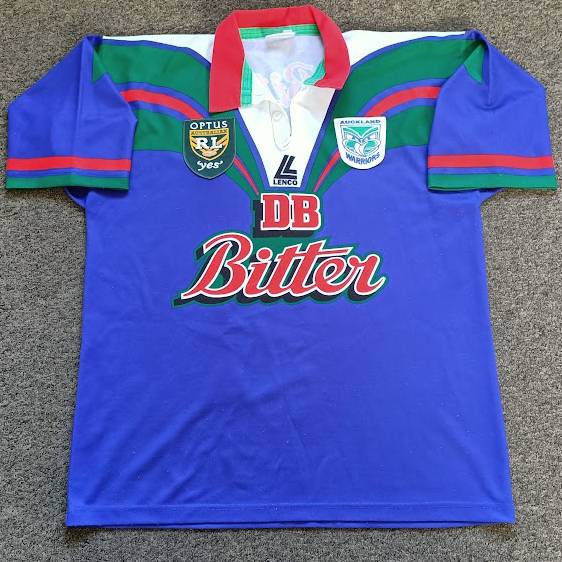 I stand to be corrected but I can find no evidence at all of an away jersey for this year.


CHECK THROUGH THE IMAGE GALLERY OF THIS POST TO VIEW THE DIFFERENT TYPES AVAILABLE​
OFFICIAL REPLICA JERSEY - Replica jerseys with the Optus badge made it to market late. Also the fact that it was basically the same jersey as the original 1995, which sold in huge volumes, with a slightly different badge meant that the public didnt buy many. Because of this the jersey isnt very common but that doesnt make it any more valuable than the 1995.

REPLICA VARIATIONS - Up until 1999 the ARL/NRL owned the manufacturing rights to teams jerseys and would sell licences to producers. Variations were made by CCC, Sport M, Peerless and Peerless New Zealand. There is also a modern remake made by Classic and known as Retros.

PLAYERS JERSEY - Players jerseys for most of the season had three separate badges for the ARL, Optus and Yes. There is match photo evidence of players wearing jerseys that had the replica styled badge but more research needs to be done on it.

Jerseys with a high number such as the #22 example in the pictures would almost certainly be used by the Reserve Grade with numbers for that team going into the high 30's (possible higher?). Doesnt make it any less desirable as the Reserve Grade made the Grand Final in 1996. Jerseys that were worn in that Grand Final had the following embroidery on the left breast under the Warriors logo:

Only example I have ever seen resides in the Mad Butcher collection in the East Stand of Mt Smart.

Players jerseys from this year are extremely rare. I have only ever seen 3 of them in private collections with the Butchers being one of them. Its worth what someone is willing to pay for it but I paid around $480 for my one in 2012...
Share:
Facebook WhatsApp Email Share Link