Why the Lane swap makes sense 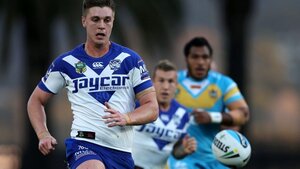 Many New Zealand league fans were disillusioned to hear news this week of the Warriors sending Otahuhu boy Raymond Faitala-Mariner off to the Bulldogs in favour of Australian forward Shaun Lane.

In some ways that’s understandable.

The Warriors are New Zealand’s NRL team after all and have a wealth of home-grown talent in the lower grades which people want to see stay in Auckland.

But put that aside and the Lane for Faitala-Mariner swap makes good sense for both clubs.

There is no doubting Faitala-Mariner’s talent. Big, powerful and a clever edge runner, the 22-year-old should play plenty of NRL.

But the Warriors have athletic ball-playing back-rowers of his ilk in abundance right now and probably always will do. The Bulldogs on the other hand have been lacking some creativity out wide since losing Frank Pritchard, which Faitala-Mariner can help to address.

In Lane the Warriors gain a different type of forward – a giant of a man at 198cm and 115kgs, but not built in a way which will confine him to the middle of the park.

Usual starting back-rowers Bodene Thompson, Ryan Hoffman and Simon Mannering are all very good players who work hard on both sides of the ball, but they share similar styles which can become a little predictable in attack.

While Lane almost certainly won’t play 80 minutes or make 40-plus tackles like those players do, he can mix things up with different running angles and the ability to punch through the line with conviction.

The fact that he can play back-row or prop is also helpful under the new interchange rules, making it easier to carry a dummy-half option on the bench without sacrificing size and go-forward.

The Broncos have it, with Sam Thaiday, Adam Blair and Corey Parker all able to switch between the edge and middle competently. That allows starting No.9 Andrew McCullough to shift to lock at times and give Brisbane a different hooking threat in Kodi Nikorima, while the young Kiwi can also serve as cover for most of the backline if injury strikes.

Lane probably won’t feature every week for the Warriors in the NRL, but he can add some real value for the rest of the season, while in Sydney Faitala-Mariner should have an improved chance of regular runs in first-grade. (Main photo: photosport.nz)
About author