Where is the leadership we need so badly? 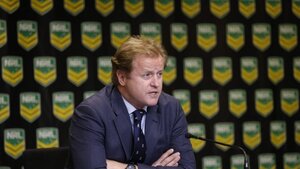 Comments Smith made to Sydney Morning Herald rugby league writer Brad Walter this week indicate the NRL has little intent to expand beyond its current 16 clubs any time soon.

“I think our clubs are stronger, there is no question about that, and there have been some interventions over the last couple of years to make them even stronger but until you have got 16 sustainable, profitable clubs that are able to re-invest back into their clubs it seems inconceivable that you would add a club and just add to the burden,” Smith told Walter. “I think there has been a lot of progress been made there but you have got to get that base strong before you can contemplate adding any more NRL teams.”

What Smith fails to address is that there are clearly too many teams in the crowded Sydney market, which is partly why some are not financially stable. What happens if those financial issues are not fixed for another decade? Does the game continue to hold itself back just so a couple of clubs in Sydney, that wouldn’t be missed, can get themselves up-to-speed.

The reality is that the game has been ready to expand to Perth, to Brisbane for a second time, to New Zealand again and other locations for years already. It has been the over-saturation in Sydney that is holding things up. If the NRL ever embarked on an A-League-style scrap everything and start again model – there would be an obvious move to introduce more teams around Australasia and to have less in the crowded Sydney market. Throwing the table scraps (a NSW Cup team) at some new places will have next to no impact. Just like taking Sydney home games to Cairns or Perth is little more than a money-making exercise for the Sydney clubs and the NRL paying lip service to the rest of the country.

This is a time for true leadership – for someone to take a hard stance and do what needs to be done for the long-term good of the game. Is the game poorer for not having the North Sydney Bears or Western Suburbs Magpies playing at the moment? Aside from some old fans of those two teams, the sport isn’t missing them one bit. Just like they wouldn’t miss the Cronulla Sharks, Wests Tigers or Parramatta Eels a decade from now. But fast-forward 10 years and let’s try and predict if the game would be missing an established franchise in Perth, in Wellington and another one in Brisbane. The answer is a resounding yes. Reason being is that in 10 years from now (or two television deals away) the NRL could have found itself with a strong presence in a different television market. It could have found itself measuring up favourably to the AFL and other rival sports in Brisbane and New Zealand. Heck, 10 years from now the AFL might have more teams in Brisbane than rugby league does. They could have a franchise in New Zealand, eating ever-so-slightly into rugby league’s territory.

Smith was quick to roll over and take the big television cheque from Channel 9 but it was without any real thought to the future that he accepted that deal. We all wait anxiously to see how well the completed television deal from 2018 (once pay tv and digital rights are finalised) stacks up this time around but cast your mind forward to a couple of television deals from now and it makes for nervous times for rugby league fans.
About author
Play The Ball
This article has been written by Dale Budge. Dale is a well known rugby league commentator and journalist, having covered the sport for over 10 years.

The concept of using the lower grades to assist in growing the game is an interesting concept. The expansion underneath needs to work with the expansion at the NRL level. Is the plan for one of the new teams to develop and then get promoted to the NRL? By all accounts the bids that are already being developed for inclusion in the NRL are pretty far advanced and have money behind them ready to play at that level. Perth I beleive have a rich backer and if they don't use the current stadium have approval for a new stadium if they get approval to join the NRL.

Is expansion held back due to the financial status of the current clubs or is the decision on who to include and how many looked at as being too difficult a decision?

Before the Commission came in all the talk was the Commission need to look at expansion and the number of teams in Sydney. When the Commission was formed and they had the 16 clubs along with the NSWRL and QRL taking ownership of the game and having voting rights on the Commission members. Dave Smith and his team should look at the competition structure and then recommend it to the Commission to review and vote on. If they decide to remove a club they are removing one of the voting owners. If a new club comes in I presume they get voting rights as well. That ownership structure if I have it right seems like it would cause issues removing a club.

The broadcasting deal it seems like they organised this to early. All of the talk beforehand was they needed to talk with the broadcasters and get an understanding of what they were willing to pay for if the competition looked a certain way. Surely they should have let Shane Richardson finish his review (lets assume he hasn't) so we could decide on if we need to extra teams and maybe 22 rounds to relieve the workload on the players and a chance to add internationals or time in the pre-season for the 9's, World Club Challenge etc.
Dave Smith Has just Quit as CEO
Just in
Dave Smith has quit as CEO of NRL