What we learned: Warriors trial #1 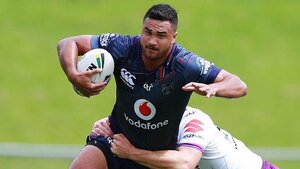 Here’s what we took away from the Kiwi club’s first pre-season trial of the year in Rotorua.

Jazz Tevaga is not an NRL hooker

Poor service from dummy-half was an unfortunate feature of Jazz Tevaga’s game against the Storm, with no sign that he has made improvement in that troubled area of his game. There were also a couple of times when he made poor decisions at the bottom of the ruck, showing if he is to play NRL this year, it will have to be as a lock or edge forward, not at dummy-half.

A former Junior Warrior, Peta Hiku returned to his old club and was one of the club’s better performers against Melbourne, starting at right centre before spending some time at fullback. A big problem for the Warriors last year was a lack of backline depth, which made it hard for Kearney to punt out-of-form players. In Hiku, they have a player who can comfortably play fullback, centre or wing, and the Kiwi international looks set to prove a good pick up.

Right edge gets a tick

If the squad for Round 1 was picked today, David Fusitua would be on the right wing and Blake Ayshford would be partnering him as the centre. The pair once again combined nicely down their flank, following a 2017 season where they were consistently strong. While he continues to have his doubters, Ayshford is arguably the best centre on the Warriors’ books right now, and showed great skill to set up Fusitua’s try with a catch and pass under pressure from sliding defence.

Chris Satae looks to have grown from his rookie year

He went looking for work and was consistent in his carries, which should be music to the ears of a club crying out for an inexperienced front-rower to take the next step and help their underperforming pack. Albeit against a small Storm side, Satae looked confident in his work, and while unlikely to be in the first-choice 17, should be a capable bench back-up in 2018.
About author